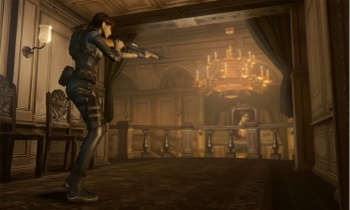 Then, you have an idea. You plug your cyber brain implant directly into the ship's network, discovering to your delight that it's unsecured. Now having access to all the ship's internal functions, you access the security cameras and overlay onto your vision a live feed of the room you are currently in. Thus the game turns into a fixed-camera survival horror game like the early Resident Evils, albeit with a twist: you still use first person movement controls from the perspective of your actual body, pressing up on the controller to move forward, etc., and hear the game's audio as you would from your actual physical ears.

Essentially the experience becomes an escort based game in which you are escorting yourself from outside your body. And under these conditions you must explore the stricken ship, discover what happened, and avoid being killed by the inevitable horde of former human cyber ghost monsters or whatever they are. But how the whole tortured cyberpunk setup makes things different to a standard fixed perspective survival horror is that the camera won't automatically switch to the one your character can be seen by, you'd have to switch manually. This might sound like a pain but it also allows you to view areas you aren't in, allowing you to plan your route and spy on monsters you might need to stealth around or take by surprise.

The beauty of it is that you can access the rest of the ship's online functions to help you in the physical world. With access to the electrical systems you could reroute power to areas you need to access, or away from the lighting in certain areas in order to create a few shadows to hide in. Perhaps use power surges to create explosion traps for enemies, so you don't even have to confront them physically. You can also access documents and audio files on the ship's network for the prerequisite scary logs, with encrypted folders containing all the story's dark secrets that you can't access until you've explored enough to find the passwords.

But most importantly the game would be a great fit for the horror genre because of the separation between the player character and their perceptions; the messing with their sense of identity. How can you trust the evidence of your senses if your senses are third-hand, filtered first through a security camera and then through a cybernetic implant? How do you separate what's really there and what's being overlaid? You see, the full plot I had in mind played with this theme. You would eventually discover that the cause of the ship's downfall was some kind of computer virus, for in the cybernetic age, such things make effective anti-personnel weapons. With everyone's vision filtered through brain chips, a skilled enough hacker could get inside those chips and make the owner perceive whatever they wanted. The virus caused everyone on board to see each other as monsters from their worst nightmares, and so they tore each other apart. This revelation then casts doubt on the monsters the player himself has been perceiving - all those things he killed, were they survivors? Infected humans? Or were they not even there at all?

Untitled Cyberpunk Cruise Ship Game (XBLA and PSN) receives mixed reviews. Many praise the effectiveness of the atmosphere and the originality of the setup, but many simply can't get past the awkwardness of controlling an avatar first-person style from a fixed third-person perspective. The reviewers who say as much, however, are all brutally murdered in the series of slayings described by gaming personality turned serial killer Yahtzee Croshaw as his "dark harvest". Croshaw would remain at large until his mysterious disappearance, and the genuine facts about him would become impossible to separate from myth in the grisly legends parents pass in hushed tones to their children.