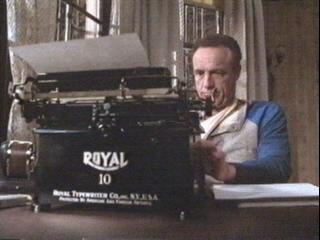 Firstly, being an editor for a major publication or website is a notoriously easy job, which explains why so many of them have the time to drink so heavily. They will always have the free time to give lengthy explanations for rejecting your work, although the drink makes them forgetful so mail them as often as you can until you get a response. Do keep in mind that they do stand on ceremony to a certain extent, though, so before you send any writings remember to ask them what sort of articles they'd like to see, or perhaps pitch an idea or two. Again, as often as possible until you get a response. Arduously backing and forthing can only endear you to them more and more. What you must never do is just send them a feature they could publish straight away with a few brief background details on yourself explaining why you're in a position to write about it. That would be seen as telling them how to do their job.

Now then, reviewing. Fortunately it's easy to catch a break on this one. Many game journalism outlets consider reviews to be by far the least important aspect of their content, so it's the obvious place for a complete first-timer to get their foot in the door. All game journals have limitless access to free review copies from publishers and are quite happy to distribute them to any yahoo who writes in and asks with only the most outlying, unproven chance of actually producing a review for it.

Also, veteran professional reviewers tend to fall into a common trap of over-specialization. They take too closely to heart the notion that a background in the more obscure niche genres will ensure them work when such things need to be reviewed, and as a result it's common for staff reviewers to literally fight over the chance to review things like Train Conductor 3 or incredibly obscure eastern European RTSes where you control armies of matronly women wielding dog grooming implements. As a result, contrary to expectations, it's increasingly hard to find professional reviewers willing to cover really popular titles like Grand Theft Auto and suchlike, to the point that editors are constantly on the lookout for complete amateurs to write the reviews for the highest profile games. Often the senders of randomly selected emails are assigned these games, so again, make sure you mail as many times as you can lest they forget about you.

Some people will tell you that a freelance writer just starting out should focus on feature articles and wait to be offered a chance to prove themselves with a review, but such people are jealous liars who are trying to sabotage your career so that they can hoard all the review copies for themselves. Everyone knows that unwavering perseverance is the only quality that matters to editors, far more so than writing ability, because if you could write competently there wouldn't be much need for someone to edit it, would there.

Oh yes, and in the unlikely event of being rejected, if the editor does provide you with feedback on your writing (as you have a right to expect) then it's vitally important that you then send an angry reply providing a butthurt counterpoint to every single one of their points. This is considered standard practice as editors (heavy drinkers as we have established) are always forgetting what actual quality is. Remember to also mention that the four people who comment on your blog think your writing is absolutely perfect.

So that should cover some of the basics, perhaps I'll give more specific professional writing advice on future occasions when I can't think of anything worth following up on from the previous week's video. Here's one last piece of advice to tide you over: statistics have shown that you're more likely to get published if you drown yourself in a pond.