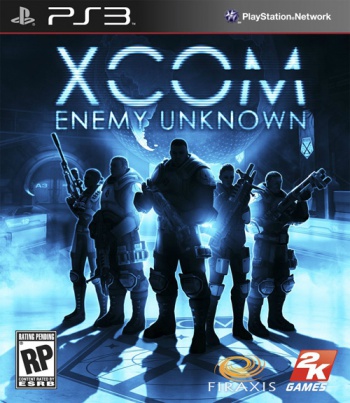 XCOM: Enemy Unknown: X-com? More like U-turn, am I right? It is heartening to see that they aren't going with that 1950's Bioshock rip-off FPS thing they were teasing a while back, but at the same time, less so to see it replaced with power armor space marines, which are to the games industry what pigeons are to Leicester Square. But it's nice to see that alien autopsies are back, something I took a weird pleasure in in the original, and the promise of "permanent death" twitches my ears a bit. Did you ever play Cannon Fodder on the Amiga? Every time you enlisted new uniquely named soldiers you were forced to look at a big green hill just outside your headquarters where there was a single white cross for every soldier who'd already fallen in your name. It was great 'cos it worked on two levels: if you had a soul it was an emotional wrench that forced you to think about your actions, and if you didn't it keeps score.

Halo 4: The prospect of a new Halo game does give me positive feelings, because I said there was no way in hell this money-printing license was going to get put out to pasture just because Bungie was done with it, and it's always nice to be proved right, even if one didn't have to be Nostradamus to see this coming. It is nice to see that they seem to be starting a new story in the same universe rather than trying to put an extension on the existing one, which is why it's odd that they're calling it Halo 4 when it's not really a continuation. Come to think of it it's odd they're still calling it "Halo" at all, actually, considering how much of the franchise has actually had anything directly to do with the thing it's named after. They should rename it Master Chief And Some Blue Lady In A Onesie.

Farcry 3: Firstly, shagging in the trailer, awesome. Secondly, the "hunt/eat/fuck" thing made me wonder if the game will have some kind of survival aspect, which would be cool 'cos I've been really getting into Minecraft's hardcore mode lately. But most importantly after setting the tone for a gritty intense psychodrama the trailer instantly cuts to an advert for some kind of preorder bonus involving wacky monkey suicide bombers, which made me laugh if nothing else.

Kingdom Hearts: Dream Drop Distance: I didn't watch the trailer for this one, I just wanted to point out that the title is fucking stupid. It sounds like a term used in engine programming. "Yes, our texture renderer gets a pretty good drop distance now, but our dream drop distance would be around 8.7". I'd also like to challenge readers to say "dream drop distance" ten times fast.

The Wii U (again): But after all was said and done, to me there was no greater gift offered by E3 2012 than one picture I saw of the Wii U in action. A picture in which the player was fiddling around with the touchscreen controller while in the background, gloriously, a TV screen had its image blacked out and the words "Look At The Touchscreen Controller" superimposed across the middle.

In one succinct image, evidence for the entire Wii U concept being completely mishandled. I could maybe see a use for having two simultaneous screens in a hardcore title if you want an inventory screen or something without having to pause the game for it, but what's the point of operating the screens asynchronously? What is being shown on the touchscreen in this instance that cannot be shown on the main screen? You see, my problem with the Wii U touchscreen - and with motion controls to a lesser extent - is that for whatever they might add to a party game, in hardcore games they are a solution looking for a problem. It's gimmickery of the highest order, meaningless, decadent innovation rather than any attempt to address an actual issue with gaming, like controllers requiring both hands or lacking some kind of secret compartment that dispenses rum.

And yes, I do feel positive about all this. Innovative new games are one thing, but at the end of the day, nothing makes me feel more positive than something I can get really pissed off about.