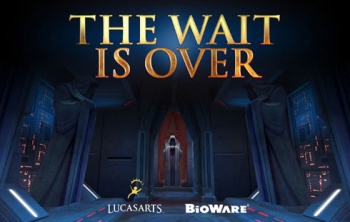 The traditional MMO combat system of pushing number keys or function buttons to activate abilities, coupled in some instances with taking advantageous positions like getting behind an enemy for a backstab or keeping one's distance to avoid being targeted, is something I've never enjoyed but learned to deal with in order to play MMOs. I find myself getting bored with this typical state of affairs in The Old Republic much faster than I have in other MMOs because the combat is so much less engaging than the story and the role playing.

"Fetch-and-return" and "Kill [X] number of monster" quest types are conventions that MMO genre fans are used to, but they feel like a more egregious waste of time in The Old Republic. I am normally a completionist in either single-player RPGs or MMOs, taking every side quest available in order to experience all the content the game has to offer, but in The Old Republic I'm seriously considering eschewing all quests other than those connected to the main storyline because I want to get to the next cut scene as quickly as possible. Having to plod through typical, boring MMO quest types is getting in the way of experiencing what's fresh and new for the genre.

As a consequence of being drawn more deeply into the world of The Old Republic by story and role playing than I am normally drawn into MMO worlds, I'm noticing more clearly the inherent strangeness of how all worlds seem to be created in the genre. Did you ever notice how most indoor MMO environments seem to have ceilings that are 50 meters high, as if a race of giants built the universe and then abandoned ship just before all our characters walked in? I have always understood there must be a perfectly-valid reason for this typical MMO design choice, but in The Old Republic it's not quite working for me.

Players often have the same companion or pet as other players in MMOs, but in The Old Republic these companions can be characters who participate in cut scenes and therefore have more heft to them than the typical henchman or meat shield does. Seeing ten people run by with a clone of "my" Imperial Agent's companion Kaliyo Djannis immediately breaks the illusion that I actually have a companion at all. Again, multiple players having the same companion in an MMO is a convention that The Old Republic's developers would have been hard-pressed to eliminate, but this time it seems strange.

I mean none of these observations as criticisms of The Old Republic, which is reportedly the most expensive development project in the history of publisher Electronic Arts. It would be foolish to suggest that Bioware should have attempted or even had the financial resources to simultaneously challenge the status quo in MMO design on all fronts, and as I've tried to argue here the changes they did make stand to have wide-reaching repercussions we are just beginning to figure out.

The long-term importance of The Old Republic to MMO development might not be the changes Bioware introduced, however, but the necessity of judging whether or not the rest of the game adequately supports the changes made. The answer to that question will ultimately drive the genre forward, or make The Old Republic a singular experiment in MMO evolution which goes unrepeated.

First Person is a weekly column by Boston, MA-based freelancer Dennis Scimeca. You can read some of his other musings on his blog punchingsnakes.com, or follow his random excitations on Twitter: @DennisScimeca.