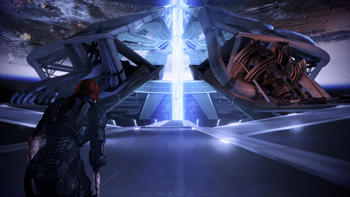 My Commander Shepard would point out to the Catalyst that synthetics and organics were working together to fight the Reapers. She would point out that in her cycle the Geth were dealt with, and in the previous cycle the Protheans had dealt with their own problems with synthetic life and maintained the balance themselves (Javik tells this story in the "From Ashes" DLC). My Shepard would refute the Catalyst's bad solution to a nonexistent problem, and is smart enough to realize that any species which has the insane technology to build devices like the Citadel, and the mass relays, and the Reapers is also smart enough to know how to turn off some, not all, of that system. She would tell the Catalyst to destroy the Reapers and then get the hell out of her way.

Maybe this option would only be open to players who have maximum Reputation, who have earned the Achievement for getting the preponderance of War Assets ready before the final battle, who saved the krogan from the genophage and made peace between the quarians and the geth. Maybe this is a meta-choice only available to players who have clearly laid the foundation for it, the same way only players with enough Paragon or Renegade points can make certain, other choices during the three games.

I might feel arrogant proffering this idea if I didn't feel BioWare had disrespected the intelligence of their audience by leaving such gaping holes in the plot. I'll address only one specifically: There's an energy beam that Shepard can throw herself into, in order to synthesize all organic and synthetic life into a new paradigm. Why didn't the species that made the Reapers just grab an organic, throw in the same sorts of cybernetics Shepard has (an easy feat if they can build the entire mass relay system and the Citadel) and then toss their guinea pig into the beam and create this synthesis themselves? If their goal was to end the cycle of organic and synthetic conflict, that'd do the trick, wouldn't it?

I'm down with a weird ending if it makes sense in the context of the narrative. 2001: A Space Odyssey has one of the most bizarre endings I've ever seen, but it's supported by the narrative and the tone of the rest of the film. I'm down with a sad ending if it folds into the narrative properly. I love the ending of Glory even though every character I care about gets slaughtered. But all three, current endings of Mass Effect 3 don't hold up to even the most surface-level analysis. BioWare made the same mistake M. Night Shayalaman continues to make over and over again, throwing in a high-concept ending for the explicit purpose of trying to shock the audience.

BioWare can give some of their editors the footage they need to complete the story those editors chose to splice together, up until the point of penultimate decision. A fourth option is a professional, respectful compromise, not bowing to a mob. The existing endings would stand for anyone who wants them, and the experiences of those players would be honored and protected. BioWare saves face, any reasonable option to complain melts away, and the industry learns a valuable lesson: If you're going to make a blockbuster Hollywood movie with a videogame attached to it whereby you nominate the players as your editing staff, commit to your decision. Understand what it means to make the player the editor, and give them the raw materials they need to cover all the angles like a good director would.

I think it's worth giving up a little creative control to maintain the positive experience Mass Effect was up until its very end, rather than having it collapse into a divisive, angry spectacle. That's not what I want to remember when I look back at the series twenty years from now. A compromise might turn this into a story of understanding the collaborative potential of videogames, and that's what we'll remember.

First Person is a weekly column by Boston, MA-based freelancer Dennis Scimeca. You can read some of his other musings on his blog punchingsnakes.com, or follow his random excitations on Twitter: @DennisScimeca.