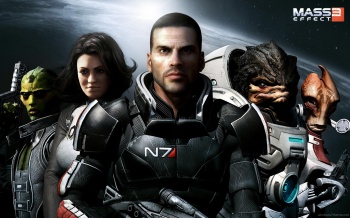 Catalyst: The Reapers are a synthetic representation of my creators.
Shepard: Then what happened to your creators?
Catalyst: They became the first true Reaper. They did not approve, but it was the only solution.

Yeah, I'm pretty damned sure they did not approve while the artificial intelligence they created to serve as a mediator for conflicts between synthetics and organics rendered them down into paste to make them into the first Reaper. Viewed through the lens of this disclosure, the Catalyst doesn't sound like it's correct anymore. It sounds like the Catalyst made a decision that might have sounded correct to an AI, but which misses all the nuance of life and choice and potentiality.

The Catalyst might be wrong. Conflict might not be inevitable. It's much easier to understand a rogue artificial intelligence slaughtering the races of the galaxy every 50,000 years in a misguided attempt to address a perceived problem than to swallow a proposition that is clearly contradicted in some of our Mass Effect 3 playthroughs.

The endings themselves vary in the level of improvement. The most obvious criticism of the Synthesis ending was why the Catalyst didn't force a synthesis between organic and synthetic life a long time ago. In the Extended Cut, Commander Shepard asks the Catalyst this question. The Catalyst replies that organic life previously wasn't ready for synthesis, and that synthesis couldn't be forced. The Catalyst follows this up with the pronouncement that organics are ready this time, thereby dismissing the idea that synthesis effectively does get forced upon everyone in the galaxy should Shepard make that choice.

This sort of convenient coincidence, that after eons of extinction cycles organic life should just happen to be ready for a synthesis now that we happen to be playing Commander Shepard deserves a roll of the eyes. BioWare at least tried to address the criticism, but the new Refusal ending is what should have stood in place of the Synthesis ending from the beginning. The Refusal ending, in which Shepard refuses to either sacrifice herself to control the Reapers, force a synthesis upon the galaxy, or potentially destroy Edi and the Geth to also destroy the Reapers sounds like what a neutral Shepard would choose. And the Refusal ending is downright chilling. I'm not going to spoil it for you. If there's one ending you should absolutely go back and try, that's the one.

The main criticism of the Control ending, that no one knew what the hell it actually meant for Commander Shepard to take control of the Reapers, has been completely addressed. It's certainly a Paragon ending now. Shepard sacrifices herself in order to turn the Catalyst's Reaper system into a preserving force in the galaxy rather than a destructive one. It may be a sickly-sweet ending for some, but it does reflect a Paragon's virtue.

My only concern about the Extended Cut is the still images depicting what happens to all of Shepard's squadmates. I understand that some fans were upset at not having enough closure with all of those supporting characters, but I think the memorial scene on the Normandy fulfilled that purpose adequately. The questions about how the Normandy got where it was at the end of the game, the abrupt introduction of the Catalyst, the lack of clarity on what the final choices meant, those were all things that absolutely needed addressing due to how plainly the author's intended meanings were being lost.

Not showing individual epilogues on the other hand wasn't an error. It was a choice. The endings didn't fail to function properly on a structural level on account of the characters not having individual epilogues. Adding those stills feels like BioWare surrendering a little artistic vision and pandering to the audience. That's the Pandora's Box opened by post-release narrative changes. The last thing we need is a George Lucas of videogames inspiring debates about whether Commander Shepard shot first or not.