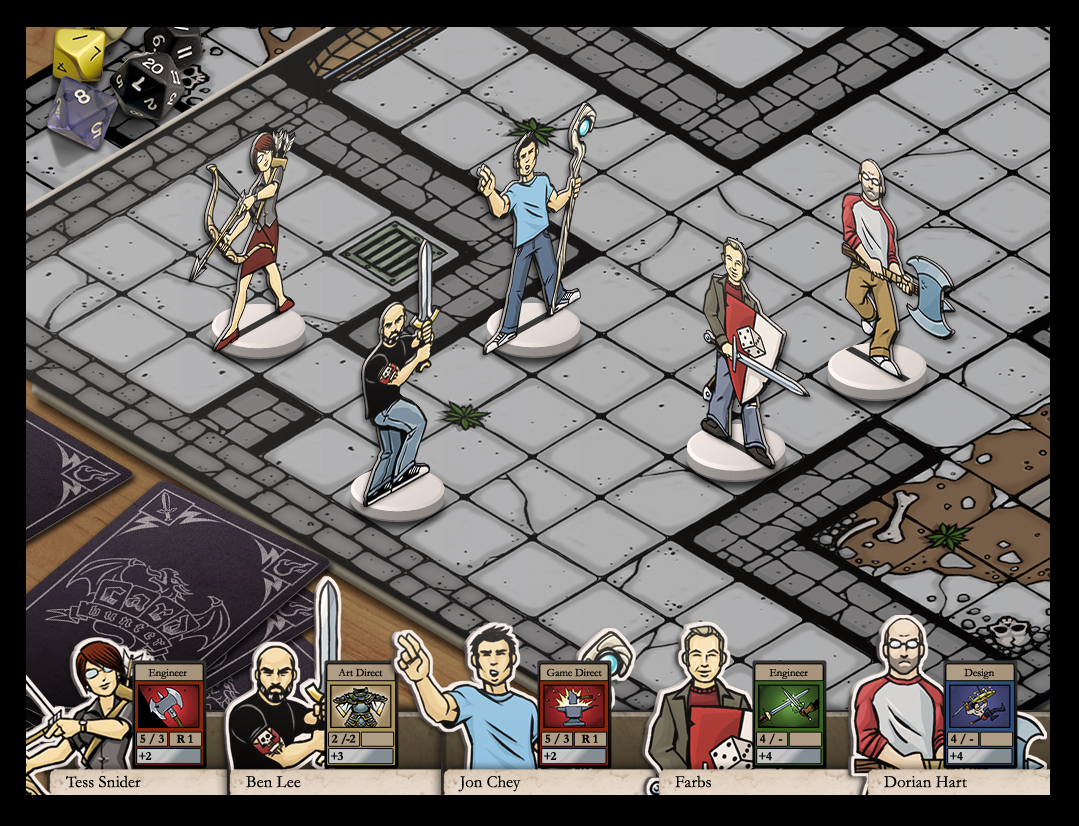 There are also defensive cards like blocks and armor, which you don't play. They're automatically activated whenever a character receives an attack, and are followed by a d6 roll to determine whether the block is successful or whether the armor mitigates the damage. The round goes back and forth between player and computer, and if they don't want to play a card in a given turn they can Pass. When both sides Pass one after the other, the round ends and new hands of cards are dealt to all the surviving miniatures on the board. There will also be a PvP component to the game which I didn't get to see but am made to understand follows the same basic rules.

Your characters gain experience and level up and you can attain and equip different gear, and the way cards work is they are tied to pieces of gear. One sword will add a set of cards to your deck and a different sword will add a different set of cards to your deck. One sword may be more offensive in nature and grant a bunch of attack cards but no block cards, and a different, more defensive sword might have the opposite card ratio. You don't actually "build" your deck card by card. Your deck is constructed based on the gear you've earned or unlocked. And as the game progresses you will unlock new and better cards.

What's amazing about Card Hunter is that even though the mechanics are unlike anything I've seen before, the game still plays precisely the way you'd expect it to if you know the fantasy game genre in terms of basic tactics, character classes and strategy. Jonathan Chey started the demo giving me advice on how to play but within a few minutes was just watching as I completely owned the dragon in the second half of the demo. The game was delightfully intuitive. I finished the demo feeling energized and inspired. I just wanted to go home and play more Card Hunter.

That's when I remembered the feeling I'd had right after the triple-A demo had ended, that silence, that utter void of curiosity, questions, or enthusiasm. I had just played the demo of a huge release and it was a completely empty, throwaway experience. By comparison, sitting in a little space in the Indie Megabooth the following day I was excited and smiling and happy because I'd just played something different, something interesting, something engaging. That's when I realized, with a sigh, precisely what everyone meant when they've criticized the boring, stale world of triple-A development.

I won't argue that all indie games are great and that all triple-A games are uninspired garbage. I think it comes down to character. I can't wait for my copy of Borderlands 2 to arrive because while it's a shooter filled with bullets and blood and guts it also has tons of character. It's just more difficult to find other triple-A games that can say the same, whereas you can practically throw a dart into a room of indie developers and find someone with a game that's loaded with character and heart, and those things matter.