The Escapist: Are you interested in seeing Elite: Dangerous move more into the Eve Online space?

Braben: I don't feel like that. The way I see it, the important difference between Eve Online and us is that Eve is an executive control game and Elite: Dangerous isn't. That's a big differentiator. What I see us doing is moving more into the richness of the experience and expanding the depth of space gameplay. I think the more games we have in the science fiction genre the better, because it's a genre that has been languishing for a bit. If you think about the way people work together in squad-type games like Battlefield 4 or even in Warcraft raids, the fun of it is in playing together and actually planning a little bit ahead. I've seen it a little bit in slightly more arcadey games as well, like Battlestations Midway, where a group of four players go against another group of four players and the difference in tactics makes a big difference. It's not symmetric. Someone might go in with a big Anaconda and essentially draw the fire, but then there will be other players in more nimble ships.

The Escapist: I've been disappointed in multiplayer games like Battlefield, Call of Duty, and even Warcraft due to how uncooperative the average player often proves to be. What sort of mechanics are you envisioning to foster that teamwork and cooperation as opposed to letting people run around like chickens with their heads cut off?

Braben: I'm hoping it isn't the latter. It's interesting, I know what you're getting at, because there was a situation I saw in Battlestations Midway. Because of the one-shot nature of the game, I felt quite frustrated playing with strangers, particularly if you play earlier in the day, some of them, particularly teenagers, quit out as soon as they think they're losing. There is one bizarre tactic where you just go hell-for-leather for their airfields and then you see that a lot of the other side just quit out. That is a depressing thing where the way the game mechanic manifests itself overshadows the game as there is a benefit to quitting early. In terms of encouraging intelligence, the incentive is very much there for the players to work together in a PvE environment, because everyone on the team will benefit and hopefully get a reward. 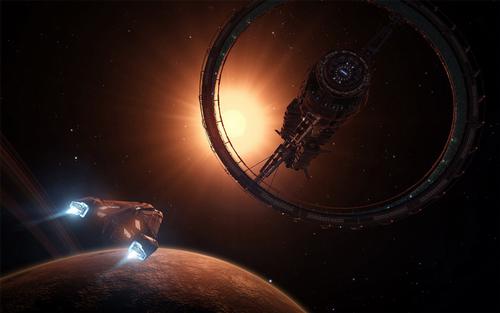 The Escapist: Let's move onto the financing angle. I know you have a much broader range of finance experience than most. You've worked with publishers, you've worked with financiers, you've funded yourself, and now you've had one of the UK's most successful Kickstarter projects. How has crowdsourcing affected your design and development compared with some of the other financing methods?

Braben: So far, in my experience, it has been the best. The approach of crowdfunding itself creates a group who are aligned, otherwise they wouldn't have come along. It's where the views of everyone come together with the idea to make a great game. When you're working with a publisher, their objectives are much more blurred. They set off with the objective to make a profitable game, but the actual individuals involved may not be a fan of that type of game. They may not be a good judge. I've seen it lots of times. Individuals try to steer a game towards the type of game they believe to be most successful. This is how we end up with so many games in a narrow genre, because that genre has been seen to be successful. We see it with all the games trying to be like Call of Duty and Battlefield, the first-person shooters, and not all of them are as good. It's because of the smell of the money there.

We're now seeing lots of people talking about space games because of Elite: Dangerous and Star Citizen. We had this with the original Elite. We discussed this earlier, how all the earlier games were very simplistic because that's what the publishers had learned would sell in the early days of publishing. A game with three lives, an extra life at 10,000, play time measured in a small number of minutes where a really successful player might last five or ten minutes at most. Elite broke that particular mold because it showed we could sell a lot and be a great, compelling game without following those rules. I think it's part of Elite's legacy that if you look six months to a year after Elite came out, suddenly the shelves were filled with a plethora of games that didn't follow those rules, some of which were very good. I strongly believe that without Elite, the publishers would not have funded those new types of more thoughtful games. They would have been met with the same stone wall that we ran into. The only reason Elite got published is because we went to Acornsoft, which was attached to the manufacturer and promoting their own platform, and they were all technical people who were also gamers. They didn't have to do business plans and that sort of thing, although perhaps they should have done. But they all went "Hell, wow, how did you do that, and how did you do this!" It was a completely different reaction than with the other software publishers. The term "who is your target audience" never came up with Acorn. They just said it is a great game, can we make it any better, how do we distribute it, all of these sensible questions. They were very enthusiastic.

Don't get me wrong, thinking about your target audience is still important. But you can become obsessed by it, and that will mean that you don't make the game you set out to make. Crowdfunding is much more like the Acorn experience, where people are here because they know and breathe and love this sort of game. That is a much better way of developing a great game. In my view the way to be successful is to make the game as good as you can. Then people will play it, and continue to play it, and you'll build a loyal following.

The Escapist: Frontier has a broader range of game development than most people realize, it's not just Elite. What is the next step you'd like to take in terms of game genre or design mechanics you'd like to introduce in future games?

Braben: There are a lot of design mechanics we're adding to Elite. In the short term we've announced more community challenges, we've got wings coming later on in 1.2, and much further down the line we've talked about having other people in your spaceship and being able to land on planet surfaces. The game is not standing still. We've already released updates and we will continue to do so. On the wider company level, we're the world experts in coaster games and we're doing a new game called Coaster Park Tycoon. This is another game we're very excited about, but we're not yet discussing the details of it yet.

GameDesign is a new column series on The Escapist featuring a game designer tackling industry issues from their perspective.