Every last Friday of the month, Scott Jon Siegel brings us another unique game design you can play just about anywhere. This week, in honor of Labor Day, Scott presents Officeball. 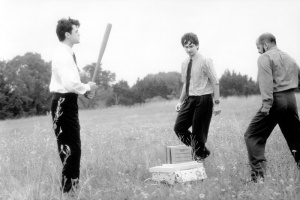 More than three (more is better).

a job in an office (preferably with a desk).
a smallish object (like a toy or office tchotchke) to be the "ball."

Officeball is less a proper game and more a simple core mechanic intended to be the basis for more complex rules. All Officeball games challenge players in a professional work environment to fight - vigorously and subtly - for possession of a particular office object, known as the "ball." The rules presented here give only a few ideas for Officeball variations. Players are encouraged to build upon the concept as they see fit.

All participating players need to agree upon one object to be the ball. The only requirement here is the object be portable and small enough to fit on top of a desk (no mini-fridges, for example). Once the object is decided upon, it should be placed on the desk of a neutral, non-playing office member. If no neutral office member can be found, players should flip, draw straws or RPS for starting possession of the ball.

Gameplay begins at a previously specified time or when the (potentially) neutral player announces the start of the game.

There are several different ways to play Officeball, but the standard rule of play always remains the same: At any time during the game, a player can take the ball from any other player's desk - or "steal" the ball - provided the following conditions are met:

1. The stealing player has a legitimate, work-related reason for visiting his/her colleague's desk.
2. The ball has not changed hands in the last two minutes.

If both conditions are met, the stealing player can remove the ball from his colleague's desk and bring it to his own. When this occurs, the ball is said to have "changed hands."

Regarding the first condition: To preclude players from simply walking up and taking the ball at any time, every move in the game must be supported by a logical, work-related purpose. This can be a work-related question, or even a request for a particular work-related item ("Can I borrow your stapler?"). Approaching a desk without a work-related purpose is an invalid move, and moves that are attempted without a proper work-related purpose or with a clearly fabricated excuse (e.g. requesting a stapler when you already have one) can be denied by the player in current possession of the ball, and the ball will not change hands.

As mentioned previously, Officeball can take many different forms. The following are only a few suggested forms of play:

Arguably not even a game at all, this is the most straightforward variation of Officeball. Players simply follow the standard rules, with no method of keeping score. The two-minute rule is entirely optional in the casual variation.

If necessary, the player in possession of the ball at the end of the workday can be declared the "winner."

A free-for-all version of the basic rules, Officeball Melee adds scoring to the game at set intervals. Coupled with the two-minute rule, this makes for interesting play sessions that can last the entire workday.

Scoring Intervals: Every 15 minutes, whoever is in current possession of the ball scores one point. The intervals should be tracked independently of all players, either by a neutral office member or ideally by an egg timer set to go off every 15 minutes.

Remember, the two-minute rule still applies here, meaning a player can't steal the ball less than two minutes after the last successful steal. Keep this in mind, and strategize to score the most points.

At the end of the game, the player with the most points wins.

Team Officeball relies on the scoring intervals set in Officeball Melee, but adds team play and additional rules for "passing" the ball (a team-based alternative to stealing).

Teams: Players should be divided into two or more teams of equal size to play Team Officeball. During the game, players score points for their team, rather than for themselves.

Passes do not adhere to the two-minute rule, although the ball can't be stolen until at least two minutes have passed since the ball last changed hands. The same "work-related purpose" rules apply with passing as with stealing.

At the end of the game, the team with the most points wins.