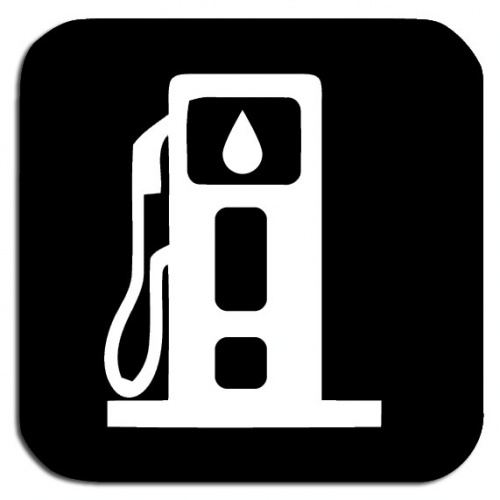 If there's one thing the last two months of Game Design Fridays have taught me, it's that designing board games is hard. Harder than designing on dice games or card games. Hence the "part one." This month's game, Petrol Panic, isn't finished. Sorry, editors. Truth is, I need some help.

Specifically, "numbers" help. Petrol Panic is in dire need of some balancing. What's presented here is the shell of the game. The basic gameplay is in place, the rules are written, but the values are not set in stone. The hope is that you, beautiful readers, will play the game, tweak the values and help me come up with the right balance.

Read over the rules, peruse the notes, and let's figure out how to solve this Petrol Panic problem I'm having.

The game (so far)

In the not-too-distant future, the price of gas has skyrocketed astronomically, but far be it for hard-working citizens to let this get in the way of their vacations. Each holiday, families take to the freeways in their sport utility vehicles to beat everyone else to the prime vacation hot-spots (hopefully with enough cash left to have a holiday at all).

Gas stations litter the traffic-congested highways, ready at a moment's notice to fill up travelers' tanks at exorbitant costs. Prices fluctuate wildly, rising and falling as traffic ebbs and flows. Luckily, oil shortages are bad enough that the gas companies are desperate, too, offering to buy back unwanted petrol from travelers looking for a few extra bucks to pay off the next toll-booth.

It's all in a day's work for holiday-bound families: Buy gas, sell gas and still have enough cash to pay the quickly rising tolls to have the best vacation ever. 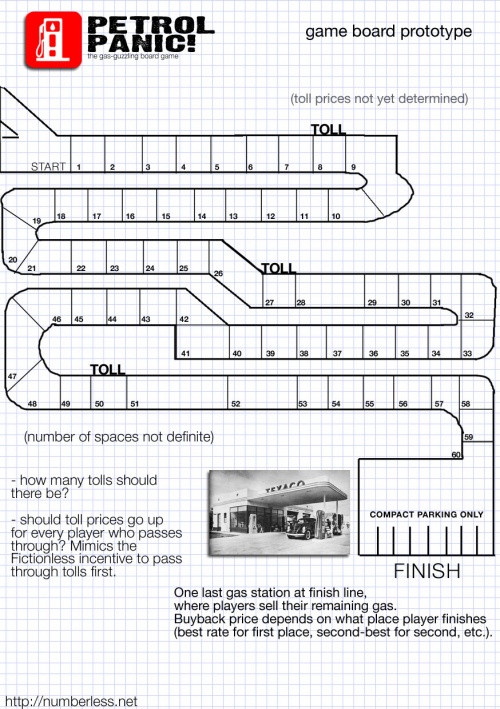 All players race along the highway to reach the vacation hot-spot. Once all players have reached the parking lot, the player with the most cash for holiday expenses wins.

All players place their pawns on the start space to begin. At the start of the game, all players have 12 gas tokens (each token represents one gallon of gas), and $100. The player with the closest birthday goes first.

During each turn, a player rolls the die. The number rolled represents the amount of traffic during the player's turn, and how far that player can move that turn. Lower numbers mean more traffic, higher numbers mean less.

After rolling, a player must make one of three choices:

A player can only choose one of these three options each turn. Therefore, if a player chooses to collect buy or sell gas, that player can't move that turn.

Buying gas: Each turn, players also have the option of pulling over to a gas station and purchasing petrol by the gallon. The price of gas is dependent on the number rolled that turn (see pricing chart). Players can purchase as much or as little gas they want.

Selling gas: A player can also choose sell gas during his turn to earn money. Like purchasing gas, the "buyback" price for gas each turn is dependent on the number rolled (see pricing chart). Players can also sell as much or as little of their gas as they want.

There are several toll-booths throughout the game board, which players must pay in order to continue.

If a player reaches a toll space on his turn, that player must stop on the space and can't proceed until the price has been paid. If the player pays the toll on the turn he lands on it, that player can roll again. Otherwise, the player must decide whether or not to pay the toll each subsequent turn before rolling.

(The price of the tolls is not yet set in stone. The best solution may be to either have set prices for each toll or to have each toll rise in price for each player who has already paid it.)

Movies and TV: Everything You Need to Know About Mad Max Marter 26 Comments