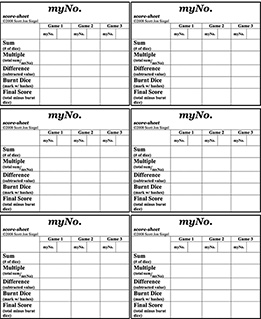 MyNo is a fast-paced dice game in which players score points by adding, subtracting, and dividing dice to match their chosen numbers in three categories. At the end of the game, the player with the highest final score wins.

All players should be seated facing each other, preferably around a table. Each player should have a score-sheet, and two six-sided dice.

Shooting is the basic phase of gameplay that occurs each round. Starting with the player with the closest birthday, players will take turns in a clockwise fashion, rolling one die at a time into the dice pool in the center of the table. Once every player has thrown their first die, they go around a second time, each throwing their second die, until all dice have been rolled into the pool.

At any point during the shooting, a player can call out "myNo!" to interrupt the process and claim dice from the center pool. Once the player has claimed and removed his or her dice from the pool, shooting resumes where it left off. Dice are claimed to score points in various categories (or, in the case of the first round, to choose a number).

Note: Knocking one die over with another to change its value is a perfectly legal strategy.

In the first round, players will shoot to each claim their number. Two players cannot have the same number, and no players are allowed to take the number 1.

During shooting, a player can claim a number on any single die by calling "myNo!" and removing that die from the pool. Any subsequent dice of the same number should be removed as well. Shooting then resumes, with other players claiming dice until every player has an assigned number. These numbers are then recorded on each player's score-sheet.

If no dice are available at the end of the round, and there are players who haven't yet claimed numbers, then shooting begins again, and continues until all players have numbers.

The next three rounds of gameplay are identical, with players shooting and claiming dice to score points. Over the course of the game, players must record one score in each of the three categories:

Players can complete these categories in any order they choose, but only one score can be recorded in each. Players can only claim dice once per round.

If there are players who have not claimed dice by the end of the round, but no dice remain in the pool, then those players record no score for that round.

If dice remain in the pool at the end of the round, and there are players who are unable to claim in any of their remaining categories, then those players divide the remaining dice evenly (rounded down), and add the number of dice to their "burnt dice" score. Burnt dice are subtracted from the total score at the end of the game.

Once the round is over, players record scores using the dice they claimed. The dice are then re-distributed evenly amongst all players, and the next round begins.

If a player successfully completes all three categories, that player then removes two dice from the game, records his final score, and waits until the rest of the players have finished.

The game continues for as many rounds as necessary, until all but one player have completed their scoring in the three categories. At the end of that shooting phase, the final scores are calculated, with burnt dice subtracted from each player's total. The player with the highest score is declared the winner.