Like Perfectionism, this is a self-documenting design, where the game teaches you how to play as you go along. Thus, you should download and play it now before reading further.

I set out to design a game system where non-player entities would help you in some way toward your goal, but only if you adhered to a certain ideal play style. If you violated the ideal, the helpers would stop helping you and perhaps even turn against you. Additionally, respecting the ideals would generally make your goal more difficult to achieve. Thus, you would have a choice: take the high, hard road, with help from the community, or take the easier, less-idealistic road, and receive flack for it.

The context for this choice would be the process of a changing community. As the game progressed, I wanted the helpers to gradually become less and less significant. You might learn to play by their ideals early on in the game, but would you continue to respect the ideals after the helpers are gone?

I explored several mechanical frameworks for the design before finally settling on an arena shooter with obstacles. 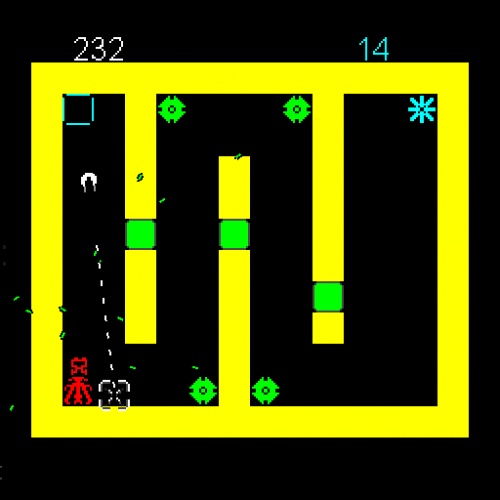 You control the white icon, and your goal in each level is to reach the blue asterisk. The red objects are enemies, and contact with them resets the level and sends you back to your starting location. The green diamonds initially help you by shooting at the enemies. The green blocks represent ideals, and they are destroyed if you touch or shoot them. When successive ideals are destroyed, the helpers first stop shooting enemies, then start shooting at you, and eventually start launching heat-seeking missiles at you. You have a limited amount of time to complete the game, and the number of asterisks you reach during that time determines your score.

In the level shown above, you can take the long and winding path, respecting the ideals, but this will burn up a lot of valuable time. A much faster path is available, if you're willing to violate the ideals, but then you must deal with antagonism from the helpers.

I'm a fan of arena shooters, but there are a few things that annoy me about most of them. First, their controls, especially on a computer without joysticks, are incredibly difficult to master (four keys per hand---ouch!). Several recent games try to incorporate mouse aiming in various ways, but nothing that I've seen has completely solved the control problem. Second, though they require quite a bit of strategy for good play, they are often too overwhelming to permit time for thinking. These factors limit the appeal of arena shooters to people with refined twitch reflexes. I didn't want to make a game that most people couldn't play, so added some twists to the controls and interface.

First, for controls, Idealism experiments with a click-to-move interface and allows free aiming and shooting with the mouse and space bar while you are moving. This control scheme makes the game much easier to play on a mouse-and-keyboard computer.

Second, I constructed a system in which time only passes when you are moving or shooting. This is akin to an auto-pause whenever you stop moving, and it allows you to catch your breath, survey the play field, and plan the next leg in your course of action. It also prevents you from burning time while you are thinking. In this game, you can think as long as you want, but these thinking breaks are sandwiched between realtime sequences with all the dynamics that they entail. For this twist in particular, it was shocking to observe its effect on game difficulty. Enemy-filled areas that were once nearly impossible to navigate became easy when you were given a chance to think and plan.

This makes me wonder about game difficulty generally. How many games are difficult only because of their controls and their interfaces? I'm reminded of an old indie game, *Wik and the Fable of Souls*, which essentially said, "Hey, jumping from platform to platform does not have to be hard," and provided a novel control scheme that makes it easy.

I must still be in the honeymoon period with Game Maker, because it's still exceeding my expectations. Of course, it's not free software, and that bothers me a bit. Here I've made a game about idealism by using a tool that doesn't satisfy my own ideals.

But for the record, I still believe in free software. I'm just taking a small short cut toward an otherwise-unreachable goal.

Game Design Sketchbook will appear every month, featuring a new game prototype and article.
Jason Rohrer is an independent game artist, programmer, and critic. He lives with his spouse and two children in the rural town of Potsdam, New York, where they pursue a simple, frugal lifestyle.