I saw a YouTube video recently that moved me. It's a pretty famous video - the source of the *Yale Book of Quotations* most memorable quote for 2007, "Don't taze me, bro!" That quote moved many people to laughter and even moved some opportunists to make T-shirts and bumper stickers. But the video, which was shot at the University of Florida in September, didn't make me laugh, and I hope it doesn't make you laugh. It moved me to tears.

The video reminded me of how scary police can be; they've got guns, and clubs, and Tasers, and they are sometimes prone toward a "stay the course" mentality, even when their course has escalated past the point of reason.

The video left me thinking that every onlooker in the room was a coward. I was also left with the impression that John Kerry, the most influential and tase-proof person in the room, was a double-coward for not stepping off the stage and getting involved.

My spouse called my accusations unfair. I've never been in that kind of situation, so how can I know that I'd be brave enough to stand up against the police? Besides, what could I really do to help the victim? Getting myself arrested wouldn't accomplish anything.

My spouse has been in that kind of situation. Her friend spoke past the three-minute limit at a city meeting, was asked to leave by the mayor, refused to leave, was tackled by police, and was eventually dragged out of the room. Everyone in the room, including my spouse, stood by and watched it happen. According to my spouse, these situations paralyze the onlookers with shock.

The University of Florida video was nominated for the YouTube 2007 Video Awards in the Eyewitness category, but it didn't win. The winning video was ironically similar to the UF video - just replace students with buffalo and police with lions.

The analogy breaks down toward the end of the buffalo video, however, as the buffalo do the seemingly impossible: they fight back against the lions and rescue the victim. But why should it seem impossible? How could five lions really be a match for a herd of 50 buffalo? How could seven police officers really be a match for a crowd of 50 students? Brave buffalo, cowardly students?

Even if the students could organize on the spot, I wasn't sure what the most effective strategy would be. I designed a game to explore the possibilities. 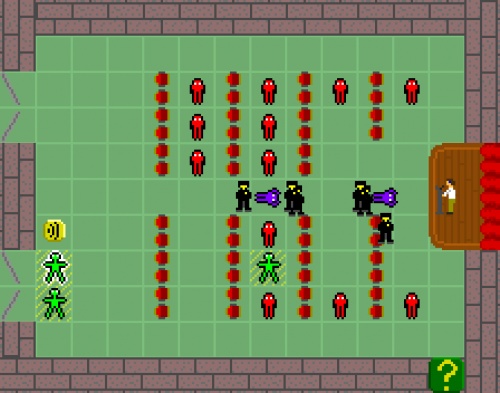 Police Brutality is a game about fear, collective motivation, ad hoc organizing, self-sacrifice, and non-violence. First and foremost, though, it's a game about shouting.

Jason Rohrer is an independent game artist, programmer, and critic. He lives with his spouse and two children in the rural town of Potsdam, New York, where they pursue a simple, frugal lifestyle.