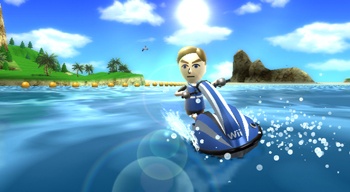 Never have games looked less exciting than in the sterile, fun-starved environs of the new E3. No big surprises, few major announcements, and a series of keynote speeches that ranged from Microsoft's schizophrenic ape-everyone copy-fest to Sony's continued need to show us titles they've been promising since before the beginning of time.

Even Nintendo, usually good for a few surprises at event time, served a tedious back-slapping affair that was more along the lines of 2003's stupefying Pac-Man announcement. Yet amongst the bland and often cringe-worthy Nintendo keynote, there was one thing that provoked a few thoughts: Nintendo president Satoru Iwata. That Iwata's address was hidden in the midst of a presentation otherwise derided across the gaming media somehow makes its content all the more prescient, because Iwata had some things to tell an industry that it seems many do not want to hear.

Somewhat gloatingly, Iwata reminded us of that the "paradigm shift" in the games industry that he promised three years ago has come to pass. "When a true paradigm shift occurs, common sense doesn't seem to make as much sense anymore," he declared - and one announcement on the heels of E3 certainly backed that up. The latest NPD data showed that the Wii has surpassed total sales of the Xbox 360 in the U.S., a console with a year's head start, a far stronger online presence and a much better line-up of traditionally strong-selling games.

This is a result that certainly appears to run contrary to common sense. Common sense for just about every major player except Nintendo is more power, more online, more features, more buttons, just more. But in practically every one of these categories, the Wii offers less.

"Five years ago...I thought that if we didn't do anything but took the same route there would be no bright future for the entire industry," Iwata told the BBC at E3, "so we decided we needed to increase the number of people gaming." Say what you else you like about the Wii and DS, but they have done just that - just as the PlayStation 1 and 2 did before them.

But whereas third party developers and publishers tripped over themselves to support those consoles, giving both PlayStation consoles far more diverse libraries than their rivals and propelling them to a collective total of over 200 million units sold, the response from third party to the Wii remains tepid. An adjustment period was to be expected, but more than 18 months since launch, AAA titles from anyone else but Nintendo remain thin on the ground.

This has far further-reaching implications than simply being another volley in the fanboy war. We find ourselves in the bizarre situation where millions of people who never entered our industry before have now taken that first step to becoming our customers - but most of us are doing nothing to keep them here. The story of E3 is not that Nintendo is failing the "hardcore" user. Put bluntly, it is third parties who are failing the consumer, and failing themselves.

Expansion and growth is crucial for any industry, but even more so for gaming, which has let users slip through its fingers since day one. How many Pong players were never converted into future customers? How many Japanese families who sat happily around their Family Computer failed to upgrade to its Super equivalent? As Peter Molyneux, another speaker at E3, noted, "the games industry has failed us all."

"When I first listened to Clive Sinclair," Molyneux recently told Eurogamer, "he said that this is the big new medium that's going to change the world. That led me to make Populous, which sold four million units. Our market share has not changed an iota since those days: We still make games that sell four million units and we still hail those as universal successes."

In the games industry's scramble to make content first and foremost for itself, we have already let too many potential users slip through our hands. Molyneux's observation is evident in recent comments such as Kaz Hirai's hope that the PS3 will sell more units than the PS2. Shouldn't that be a given?