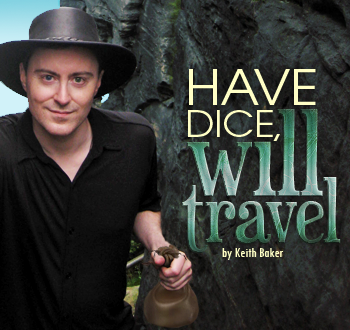 There are many stereotypes attributed to role players, but the truth is that we come from all walks of life. We're students and soldiers, programmers and prison guards, teachers and porn stars. I've resolved to travel across the world and play with as many different groups as I can - to find out what draws people to gaming, to see what we have in common and what's different. I stay for three days wherever I go. One day I run a game for my hosts. Another day I ask them to entertain me, showing me the things they love or find inspiring. The third day is open. If you're interested in being a part of it, contact me at [email protected].

Pardon me, sir - have you read the Good Rules?

I'm in Sofia, Bulgaria. My guide Stefan has brought me to a park locals call The Patriarch - a place that served as a central focus for Sofia's roleplaying community in the beginning of the twenty-first century. Stefan told me how he and friends would stop strangers on the street. "Have you heard of roleplaying games? Would you like to learn?" My mind races with all the possibilities for RPG evangelists... a team of 7th-level Adventists going door to door.

Do you have a moment to talk about Fourth Edition?

At the least it would let us take our edition wars to new levels. I'm afraid you can't come in... we're Pathfinders.

As we walked around the park, we talked more about the history of roleplaying in Bulgaria. Stefan told me about the pioneers and heroes who'd helped bring gaming to the desert. For Stefan, the greatest apostle of roleplaying was a man named Damyann. In the early nineties, D&D was unknown in Bulgaria. As a young man, Damyann loved Tolkien and other fantasy tales, and he was always searching for something new to scratch that itch. Solo adventure gamebooks were a start. These books blend game and story. The player/reader makes choices that guide him through the book... but beyond that, he creates a character with statistics and equipment, and uses six-sided dice to resolve the effect of combat, traps, and other random factors. These books gave Damyann the chance to create his own story, but it was a story limited by the imagination of the author. He wanted something more.

He wasn't alone. In 1999, Stefan was attending the University of Sofia, and he found a group of Tolkien fans. He met a woman who had translated The Chronicles of Narnia for a Bulgarian publisher, and the two became close friends. One day she presented him with a wondrous treasure she'd acquired while traveling in the west... Dungeons & Dragons. It was the Red Box, the basic edition produced in 1983, and it came with everything he needed to play: rulebooks, an adventure, a DM's screen, and dice. He pored over the books and taught himself to play. Later that same year he found a website put up by a man named Vladimir, a Bulgarian who had acquired AD&D books while traveling in South Africa and was searching for players in Sofia. Damyann met with him and finally played his first game. Soon they'd gathered a dozen people. Meeting in places like The Patriarch, they strove to pull in more players... driving the efforts of the gaming evangelists approaching strangers on the street. At their height, they had forty people coming to the park on Sundays to play and trade dice.