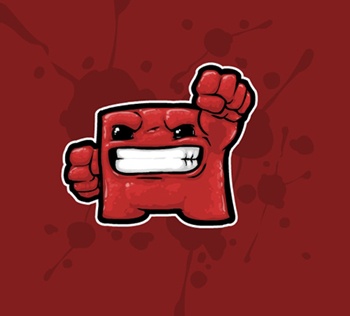 Subversive artist and indie game designer Edmund McMillen is known for constantly venturing beyond the traditional boundaries of art, videogames and even good taste with his edgy creations, yielding some incredibly original (and rather twisted) titles in the process. From outrageous games featuring dueling genitalia to stylish and thoughtfully introspective explorations that blur the definition of what some might even consider a game, McMillen is not afraid to push the envelope. Meat Boy, one of his more recent game collaboration successes, is being super-sized for WiiWare, and he's hopeful this bloody and gruelingly challenging vertical platformer about a boy made of drippy, raw meat will win over the hearts of Wii owners.

McMillen and his skeleton crew have rolled up their sleeves and are now steadily toiling away to create Super Meat Boy - a game he says will be "so amazing that you will crap your pants and so awesome that your body will suck the crap back up inside you." Sure, it's not quite the typical flavor of braggadocio you'll find streaming from the lips of big game publisher PR reps, but a "unique" attitude and strong spirit are part of what make McMillen and his work so interesting.

Last year, Nintendo initially took an interest in one of McMillen's other games, Aether, for a potential WiiWare release, but a number of factors proved too challenging to move forward with that project at the time. He instead teamed up with programmer Jonathan McEntee and musician Danny Baranowsky to make a Flash game called Meat Boy. "The basic goal was to recreate that frustration you felt when playing old NES games like Ghosts n Goblins and Mega Man, but making it forgiving enough to continue the hellish game play experience," he recalls. "A game that would cause you to destroy your keyboard, but one that was fun enough for you to buy another one and come back to it right away."

In Meat Boy you must guide the protagonist through an increasingly difficult series of (often) vertical scrolling levels filled with crumbling blocks, spinning saw blades, and other deadly obstacles. You leave a gory, oozing trail on any surface Meat Boy comes in contact with, and wall-jumping through each level gloriously paints the terrain with inadvertent carnage. The original Flash game has drawn about eight million total plays and the subsequent map pack garnered another 3.5 million. After Meat Boy's release, Nintendo got back in touch and asked about having it brought over to WiiWare. McMillen was working with programmer Tommy Refenes (who he co-conspired with to create Grey Matter) at the time. The pair decided to pony up for a dev kit and got cracking on Super Meat Boy. With McEntee on board for support and play testing and Baranowsky on music, Team Meat was born.

"The basis of Meat Boy's story is set around nostalgic videogame clichés," says McMillen. "The story is basically a mash-up of every videogame story from the early 90s, except you're a little boy made of meat who's saving a girl made of Band-Aids from a fetus in a jar with a PhD. The goal with Super Meat Boy is to take this design and push it as far as it will go. SMB will be extremely over-the-top in every way."