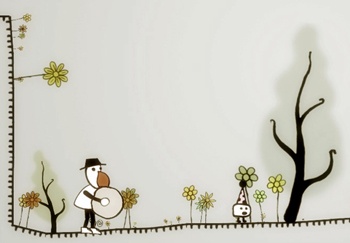 The garden is peaceful and serene, filled with edible fruits, lush flora and weird little party hat-wearing beasties that reproduce like crazy. Life also seems pretty good for the bird-beaked man in the bowler hat...until the water starts rising. Unlike his strange protagonist, Swedish game developer Erik Svedäng is in a situation that's far from dire. Last month he took home the Seumus McNally Grand Prize at this year's Independent Games Festival for Blueberry Garden - a whimsical and beautiful 2D platformer where you explore and interact with a delightful little world and attempt to keep from drowning in it.

Conceptually, Blueberry Garden has been years in the making. Svedäng first began mulling over the idea of creating an exploratory game that experimented with interactive storytelling and a vibrant ecosystem long ago. "The game that made me feel it was possible is probably, first and foremost, Shadow of the Colossus," he says. "I was also very inspired by some music I listened to at the time, especially Sagor & Swing and Detektivbyrån. I tried to capture a lot of the feeling in their songs, which for me is about the Swedish outdoors." Three years ago, he came up with the current structure for Blueberry Garden and created extensive drawings of how it would work. Actual production began in 2008, and it was submitted in nearly-complete form for this year's IGF competition.

The gameplay is pretty basic, notes Svedäng; you walk around, pick stuff up, glide through the air and explore. Eating different kinds of fruit produces various magical effects, and finding an odd assortment of objects is crucial to your survival. Beyond that, it's up to players themselves to figure out what there is to do and how to do it. "The most important part is probably that I'm trying to give the player a lot of room for thought," he says. "It's not a game where you get clear instructions on what to do; you have to think for yourself." As time passes, the game environment continually fluctuates. The decisions you make and the consequences of those choices have an impact on the ever-changing garden realm and whether or not you'll survive in it.

"The ecosystem is something that I wanted to try for a long time, since it's such a compelling idea. Most game worlds feel kind of fake in the sense that they reset when you move away from an area," says Svedäng. "Usually, there's nothing wrong with that, but I wanted to see if I could create a world that felt alive in a more fulfilling way. The ecosystem doesn't really add a lot of gameplay; it's more about creating the feeling of a real place."