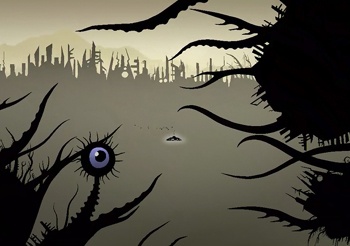 Set in a stark, peculiar, highly cinematic alien world, ITSP is side-scrolling action-adventure game with puzzle elements mixed in. You control the aforementioned scientist's UFO, while exploring the dark surface terrain that's teeming with shadow life. The high-tech saucer is initially equipped with a laser cannon for fending off the planet's unfriendly inhabitants and a retractable claw device that lets you pick up objects and manipulate elements in the environment. You'll also pick up numerous special abilities along the way. A slick docking station - complete with lots of robotic arms that unfurl and work on your vessel when you've landed - serves as a home base and lets you equip the UFO with new powers.

The development team members are all huge fans of arcade and console classics, and that era of gaming certainly appears as an influence in this project. "Some of the best games of all time strike an excellent balance between action and problem solving, and Insanely Twisted Shadow Planet aims to bring those elements together with a very unique art style combined with feature film quality animation," says Gagné. "We have some great ideas that turn classic level designs on their ear as well as some completely new themes and mechanics." The main focus is on creating a deep and engaging single-player adventure, but multiplayer, Easter eggs, and unlockables are being considered.

Independently creating a game of this scale hasn't been an easy process. After everyone committed to doing the game, they quit their respective jobs and put a demo together to pitch to publishers. Working out of a basement, the goal was to make a deal that would let the team retain some rights to the project while providing a decent budget to obtain rent facilities, obtain equipment, and paying salaries. Gagné says the initial response from publishers was overwhelmingly positive, particularly in regards to the game's art style and mechanics, but a reasonable agreement couldn't be reached on the first go around. Much of 2008 was spent taking on outside contracts in order to be able to rent a facility, financially sustain the team, and acquire the state of the art equipment needed for the project.

Work on ITSP continued during off hours and weekends, he says. Surviving on his savings, Gagné has devoted most of his time on the game since last September. However, things may be looking up. The team recently gave an updated demo presentation for Microsoft that went over quite well. Details on a release date, platform and publisher haven't been solidified at this point, but Gagné hopes to see the game come to fruition soon.

"I've worked in the film industry for years and I still love it, don't get me wrong, but with this game, I feel like I'm exploring new territories," he says. "I'm also excited about bringing my experience from working in movies and publishing into the game medium to create something truly original."

Nathan Meunier is a freelance writer, a regular contributor at The Escapist, and a die-hard indie gaming enthusiast. You can read more of his work at http://nathanmeunier.wordpress.com.