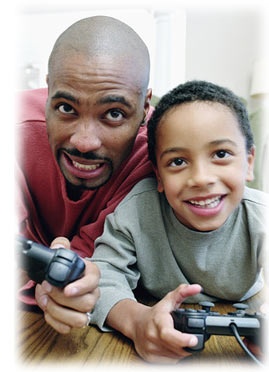 The terrific thing about these suggestions is how very executable they are. The ESRB has implemented descriptors on games, but like the MPAA ratings, they suffer from a degree of vagueness and require decoding: "fantasy violence," "violent references," "language." What does that actually mean? You can argue that the responsible parent does the decoding, but the folks I talked to were looking for something pick-up-and-play, something with a simple interface.

"I think for younger kids (say 12 and under), the rating system works wonders. My son already has all the ratings memorized and knows what he's allowed to play. And I know that if it isn't E for everyone, then they can't play it.

It's when they get a little older, and you actually have to determine, why this was rated T for teen....there needs to be more explanation of WHY it got a higher rating. Like Tony Hawk is rated T, why? Cause they spill a little blood when they fall? Is it the music? I've never figured out why some games are rated T when they seem harmless, and others that I would slap a [person] for letting my child even look at is also rated T."
- Juni, Sybermoms

Dovetailing with this was another oft-repeated theme: Parents were actually somewhat embarrassed by their lack of videogame knowledge. But because of this ignorance, they didn't know how to find appropriate games in the first place, amid the media blitz.

"If I were going to get my older daughter some games, I'm not really sure where I'd find good information on games she would like. I hate the stupid pseudo-educational games like we had when I was a kid, where it's basically flashcards only on a computer screen with maybe a dancing animated rabbit. She's reading, so if she were going to play, I'd want to provide her with story-oriented games that were oriented around logic puzzles and problem solving. But they would still need to be age-appropriate for a seven-year-old -- minimal violence / sex / disturbing material. I have no idea where I would even begin to find what I was looking for, or what equipment I'd need for her to play."
- Naomi, Sybermoms

If a single service website could combine these two desires - accurate, specific descriptors of rating-created content (short phrases that, I suspect, could even be provided as condensed marketing material by the game developers themselves as part of the ESRB submission process) with an indexed database similar to the ERSB's existing one to make recommendations in response to specific questions. For instance, "I have a 7-year-old girl. She likes dogs. What game should I buy her?" The result would be one hell of a parent-friendly tool.

All in all, though there certainly remain fronts to be conquered in the more conservative bases (though Halo has apparently made its way into churches already), my conclusions from this very anecdotal "study" indicate a lot of parents really are as down-to-earth as we'd hope they'd be, and as annoyed by the anti-game media and political hype as we are. As Mary Schmich tells us, politicians will philander, but at the end of the day, by addressing real concerns and real problems, the necessary work can get done, and the gaming community as a whole can feel good about what it does.

But this dialogue remains important, especially if we are to combat the negative press that gets so much media face time. And the parents seem to appreciate it, too. When we're faced with political attack, it's possible to fight back with return negative rhetoric, but it might be sharper to ask them: Are they really talking to the parents? You know, the people actually doing the work on the ground? Every single person I talked to had birthed a child themselves - something Jack Thompson can't lay claim to.

"I read your link and I'm so glad to read your opinion on the "bad" parent.. It's just another example of miminalizing the issue and leading to more dead ends by having those negative stereotypes. (I'm just reading Jenny McCarthy's book about austim and shocked to hear about the refrigerator mom theory.)"
- Ms. Michelle, Justmommies.com

"More on the issue, I love that this issue is being looked at by the industry. I think that, as video games become more prevalent in our society, and especially as the first generation of kids that played video games moves into adulthood and has children of their own, it is only going to become more of a focal point. I am one of those that grew up a gamer, from the Atari to Nintendo systems and now on to the last generation of consoles (I don't quite have the money for the newest generation, no matter how much I want a Wii!)."
- quietsong, Justmommies.com