Well, it's been a while, hasn't it! My apologies that this column sort of fell by the wayside in recent months. I was very busy with music stuff and honestly wasn't aware that so many of you enjoyed it as much as you did, so it kind of just drifted away for a while. But I seemed to be getting a lot of messages about it lately and when I asked on Twitter if you'd like to have one for "Dream Of The Sky" the response was an overwhelming yes, so here you go.

As is the custom, let's start off with some FAQs:

What games are you most looking forward to this year?

GTA5 for now, though if there's no Fallout 4 announcement soon I'm going to cry nerd tears into my Vault Boy lunchbox.

Who would win in a fight between Batman and Han Solo?

I think it's safe to assume Bats would come out tops on that one, even if Han fires first. Bruce has all the gadgets and moves like Bat-Jagger.

How do you feel about the new COD announcement?

Same as every year, I'll play the campaign and probably love it, then try the multiplayer for a day or two before breaking a controller and never touching it again except for private lobbies.

Do you listen to the games' soundtracks to help you come up with music style for the song?

Nowadays yes, sometimes. You guys seem to react better to songs that "fit" the atmosphere of the game/movie.

Have you any tips on starting out as a songwriter/producer/engineer etc.?

This question comes up so often and there's not really a good all-round answer for it. Honestly, "Hard work will get you places in life" is the only response I can ever think of. Work your butt off, practice your craft every day, don't let rejection and failure get you down - they are both stepping stones and opportunities to learn and improve. It took me over ten years of failure and frustration before I saw any level of success.

"Dream Of The Sky"

"Dream Of The Sky" was by far the most ambitious and risky project I've done so far. Taking on a game like BioShock is no easy task as if you get it wrong, you'll piss a lot of people off. Originally (due to the very rich and textured story) I was toying with ideas of all these different possible songs about different things, but as I got close to the end of the game I had this crazy idea of trying something totally new - a colossal, prog-influenced multi-song mini musical. I think Susan Arendt described it best when she said it was like an "overture."

The basic idea I had was that each part would represent a different person, race or class in Columbia and each would end with a "tear" opening, transporting the listener into the next part of the song, or next dimension," then ending the song by literally opening a tear back in time to my previous BioShock song, "Little Sister."

I imagined and planned the whole thing in my head first, trying to decide how it would be paced and how the dynamics of the song would rise and fall for each part. Sitting down to actually write this one was hard - there are a lot of lyrics in the song and each part had to clearly communicate whose perspective it was from and not overstay its welcome but also not feel rushed.

It took well over 100 hours to create, possibly about 120. If you'll pardon the tech speak for a paragraph, the final mix has 99 tracks (or layers of music in layman's speak) and over 550 individual parts, about 250 of which are vocals. In the screenshot below you can see about 2/3 of the vocals on the song - there wasn't enough room on my screen for the rest. (As you can see, even this one part of the song is colossally huge, so you can imagine what it all looks like together (hint - a chaotic mess). 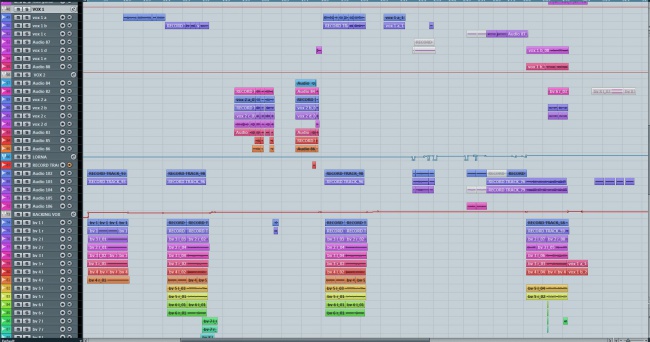 One thing I was sure of from the beginning was that, like the game's soundtrack, the song would be led by acoustic guitars and a string quartet (which I had to mostly play synth versions of, though Gwen's violin gave it some much needed humanity and a lovely, folk-like tone). The first draft was about 8 and a half minutes long. I considered actually chopping it into two separate songs but my test audience all said that was a bad idea so I decided to instead just trim as much fat as I could.

It felt natural to begin with some gentle Gospel music, as the game's introduction to Columbia also begins this way. For the choir myself, Lorna and Gwen layered up our vocals over and over and did harmonies, so there are about 20 or so layers of our voices singing together, like a full choir. The evil violin trills and creepy, dissonant sounds in the background were meant to imply the sinister undertone of the glorious golden city. These originally appeared just around the first chorus - It was actually Susan (again) who suggested they should appear right from the beginning to immediately give the feeling that something was not quite right with the picture being painted.

For the melody here, I wanted to pay homage to "Will The Circle Be Unbroken" while also making it feel bigger, as if the whole city was taking part in the song - hence the gospel choir vibe. I listened to lots of old church music and early 20th Century blues to get the right feel. The lonesome, raw lead vocal here is from Daisy Fitzroy's perspective as she learns how Columbia works and begins to feel the resentment towards the white upper class, over the musical backdrop of the seemingly harmonious choir.

After all hell breaks loose, we get to the verse from the perspective of Columbia's black citizens. The vocals here were inspired by listening to old prison and railroad blues songs. For the percussion here, I wanted it to sound like the awesome experimental percussion from the combat sequences in Infinite. I banged out the rhythms on pots, pans and breadboards from my kitchen then added reverb and manipulated them using a sampler. (A moment of silence please, for the heroic wooden spoon that was broken in the making of this song.) I then added in some MIDI drums to beef it all up and give it some thump.

The Irish part was super fun for me, being Irish. The lyrics here are kinda crazy and were tricky to sing as they're so fast, but hey, we Irish have the gift of the gab, so it was all good. It was fun to sing in my own accent; Cork people speak very musically, the legend goes that it's because of all the hills in the city, always going up and down!

The Lutece section had to sound mysterious and magical. I got this effect using celestas and old organ sounds and playing odd minor key chords (similar to the ones used in-game). Then comes the song's biggest tear - a long, dark, low droning noise (listen to this bit on headphones if you get a chance, it swirls around your head from left ear to right, very trippy).

And then in comes Lorna. A few musically-minded listeners cleverly noticed that the first notes she sings ("Songbird take me home") are C,A,G,E - and I added in a D for good measure. Those who have played the game will understand why! I thought it would be a cool little Easter Egg for the more musically attentive among you.

I knew that long-time MOS fans would get a real kick when the riff from "Little Sister" comes in, but the extra surprise here was Lorna, who just took the song up to another level. No-one would be expecting that verse (from Elizabeth's perspective, of course) to have an actual female vocal, especially one delivered as gorgeously and with such beautiful grace and vulnerability as Lorna's performance. Then when we both joined up for that final refrain, it all glued together. I remember sitting there together listening to that section after recording it and the two of us were just shaking our heads, laughing and smiling with joy. It was just one of those rare magic moments when you knew there was something really special being made. It's impossible to overstate just how much better Lorna made this song.

The original ending sampled "Little Sister" but it wasn't quite working, so instead I chose to just gradually fade everything out except Lorna's melody, after all, Infinite is Elizabeth's story. I get goosebumps when she sings that final "I am lonely," all by herself in an empty world with no more music (and don't worry that's not a spoiler, don't go mental).

Also of note was Justin's video for this one - he did a fantastic job capturing not only the spirit of the song but of the Infinite story too - and he did it without spoilers, which was probably quite a challenge. That final shot of Elizabeth looking out the window gets me every time.

So, final stats for "Dream Of The Sky":

Feeling of satisfaction due to response: Infinite!

99.9% of the response to this one was super positive but I know you guys like laughing at some of the funnier things mean stuff people say, so I've included a few for you!

Wow I got actual chills when the "Little Sister" Reprise started. Such a clever song I wish you could see me clapping.

I was happy that part pleased so many of you. It was fun to open that tear!

Your attempt at an Irish accent was terrible.

This again? You've never been to Ireland, have you?

I think this might be Justin's best music video.

You already used that bit at the end in another song.

Wow. I'm very impressed. Especially with all the research you must have done Southern music and slave music. great job on that! I also love your accents you can do. Your Southern accent was great, as was your revolution stuff, but I've gotta say it's always a treat to hear you go full Irish!

The researching part was fun, it's always good to listen to new music. As for going full Irish, well that's always a pleasure!

I see, I'm the black sheep again, but the "Little Sister" part just felt too forced.

I never understand what this phrase means. Does it mean it felt the part didn't fit with the rest of the song? Or that it felt like I sacrificed some of the song's integrity or dynamic in order to add the part in? I wish people would elaborate on these things because I learn nothing from blanket statements like that.

That was ... incredible. Seriously, everything about this song was amazing. I never thought anything could top "Sovngarde Song", but this did so. Quite handily, I might add.

After lukewarm responses to some recent stuff, it was nice to read comments like this again!

Indeed. It's not an actual song, it's just pretending to be one.

Gav, you've clearly developed so much as an artist. It's hard to believe that it's the same guy making this as the guy who made" Gordon Freeman Saved My Life".

It's because of constructive feedback from you guys that the songs have improved so much, so thank you.

Ah, YouTube. You never cease to make me smile.

Please make a version of the song with just the quiet part.

Anyway guys, thanks for the super response to this one and apologies once again for the lack of Encore lately. You can let me know in the comments if you'd like to see more regular columns or just the odd one for the more popular songs. See you next time!