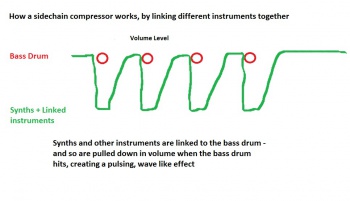 At 1.53, a guitar comes in on the right headphone drenched in a wobbly chorus effect. I like the watery feel it has. The vocals have quite a heavy reverb which added to the deep, sea-like feel.

Now, listen carefully at 2.33. As the vocal dreams of the sea, you will hear the synths move up and down in volume as the lone drumbeat kicks in, creating an effect like waves. Hear how it builds and pulses as the chorus goes on? This effect was created using a compressor called a "sidechain," which links instruments together, then sucks one track down in volume as another hits in. So every time the drum goes "thump," the rest of the music gets sucked back for a split second, creating that rhythmical, dancing, wavey sound. This effect is often used in dubstep and dance music.

You'll also notice the synth in this section is filtered - it starts muffled and muddy and gradually opens up, allowing the high, more energetic frequencies to spread out over the mix. This is a very commonly-used trick in dance music because it excites the ears and makes the song feel like it is spreading out and coming alive. It is most apparent from 2.43 to 2.56. The guitars come in at this point too, first barely audible and building to a noisy, almost metal-esque crescendo at 3.38 and then falling into a long, distorted note for the outro. All of this is meant to imply the tension and barely-contained fury and violence of the Big Daddies - after all, the song was written from their point of view.

The lyrics in this song are about how the Big Daddy sees the world. The "Little Sister" title, then, is because she is the only meaning in his life, pretty much all he is certain of, or knows. My favorite line is, "I walk through the water with my only friend" - this to me encapsulates the lonely, sad life of those big hulking leviathans.

As the song builds into its climax, I added in loads of vocal overdubs. This is what layering sounds like at its extreme - it's like there are 25-30 of me singing to you all together, doing harmonies, counter harmonies, melodies and counter melodies. It's quite a difficult thing to mix this without the whole thing becoming a cluttered, confused mess. It took a while to get it right. Trent Reznor/Nine Inch Nails was a huge influence on the way I put this part together.

I love the song and lyrics, but only critic is that you should have lowered the echo a bit, kinda made it hard to watch the video and hear the lyrics

Yeah, I realize echo and reverb can make the words hard to hear when used liberally, but I wanted to make the sacrifice just this once because the song was all about the atmosphere.

There was a nice build up in this one, tho I was hoping for a big(er) ending.

That was something I was torn on, too. The temptation was there to just let the song erupt and take off after that long build, and I actually did two versions. I felt in the end that this one worked better though, as the implied danger and feeling of barely constrained, repressed violence was, to me, a better and more accurate representation of the Big Daddy. The song is about his relationship with the Sister, not about his murderous rage - that aspect is meant to be subtle in the song and I like that it didn't dominate it.

I'm sorry I am just not seeing it ... this guys crap. If it were not related to games people would not give him a 2nd look

Thanks for contributing. I can definitely improve in the future by listening to well thought out criticisms like that.

I love the songs, but honest does anyone else feel and urge to slap the splash picture for these videos?
I've been getting that a lot. We're changing the picture soon.

Let me know in the comments which songs you'd like to hear about next month and ask me any questions you like. Was there too much technical stuff in this month's article? Let me know if some of it seemed a little obtuse or boring. I also want to say thanks to you guys for loving the songs that I also love and for constantly encouraging me to make more adventurous and interesting music.