Last week the guys answered your questions and mentioned a contest. Now they will further explain everything in their own special way on No Right Explanation.

Chris: Hark! A contest hath appeared! It's tough for me to really go into details about our most recent Omnibus episode as by nature it was meant to rocket by and then fade into the ether. I mean, quicker than our other episodes of course. But at the end we left you with a most pointed task: Make your own debate. Essentially, we've gotten a lot of great suggestions for debates, some of which we know darn well that we can't do for one reason or another, so we want to open things up and really pull in our viewers. Why? Because we actually want to encourage interaction with our viewers.

When someone asked which comments we read, we were very truthful when we said we read them all. The positive, the negative, and the WTF comments all go through our filter. Sometimes I'll even comment on the Facebook and Twitter ones (why I don't comment on the Escapist comments has to do with having an official account that I don't know the password to and my own neurotic insistence that I can't just make another account to comment). A lot of the time the three of us will sit around and discuss what people were saying. We were delighted that people enjoyed "Worst Video Game Movie". We were saddened that people hated "Animation Style: East vs West". We were embarrassed that we hadn't even considered that people in the UK hadn't heard of Mister Rogers. Essentially, we are reading and we do care.

In fact, I cared enough that I proposed the idea of said contest purely to accomplish a couple of goals. First, give our viewers a real voice. Many, many comments revolve around how we missed a point, forgot an obvious choice, or were just downright incorrect in one way or another. And I didn't want to ignore these thoughts because these are the people watching week after week (hopefully), so yes, they get an opinion. A contest would allow everyone the chance to walk the walk, so to speak. What can you do that we can't? Or specifically, what can you do that we didn't?

Secondly, we want to pass it forward if at all possible, and by "it" I mean "exposure." We got onto The Escapist as a result of persistent go-getterness, rugged good looks and general luck, but we never wanted to then just assume that we had no obligation to do the same in turn. We're no Yahtzee, or Sterling, or Chipman, or Loading Ready Run (yet), but that doesn't excuse us from trying to use our position for the greater good.

Essentially, our goal is community. We've been interacting with other Escapist shows on Twitter and in our podcast Media Sandwich, and I even went so far as to pester Cory from Critical Miss to make us a t-shirt design for this very contest, which he somehow did via some kind of sorcery. Initially, we planned to make the shirts a prize for the winner, but we want to make sure our designs are perfect before offering them up to the consumer gods. I'll still say right now that when we actually get them up, I'll personally buy the winners a shirt. 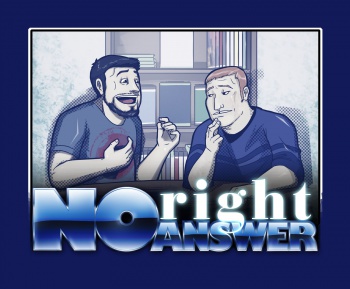 So then, you may be wondering about some more details regarding the contest itself. To clarify, what we're asking for is very open. We want one 5-minute video of a geek debate. That's pretty much it. You can choose to include the title sequence if you'd like. You can choose to include the drinking segment at the end. You can do it as a three-man debate or a one-man debate via some handy edits. You can do an entirely new topic or you can pick something we've already done that you think could have been done better. Whatever you end up doing, the winner gets his or her episode up on the site in our usual slot and added to the catalog, meaning it gets posted on The Escapist and viewed by our top editors. Basically, this is your chance to get some focus on you and only you.

Now, what may help you to consider is that the three judges will be Dan, Kyle, and myself. That's just the way it's going to be, and as humans, there are certain things we will like and dislike. I'm not a very big fan of lowbrow, crass humor or things done for shock value. Dan absolutely may contradict my opinions there. And the three of us are going to have a heck of a harder time getting into a debate that picks two unbelievably obscure choices on a strange topic unless the video is just that good (anime fans, that's a tip to help you plan accordingly). We don't mind if you take shots directly at us, but remember that we'll be able to tell the difference between good fun and just being mean, and we clearly prefer one over the other.

Okay, I'm done rambling. I'm really excited to see what everyone will come up with. Good luck and may the best video do our job for us! :D