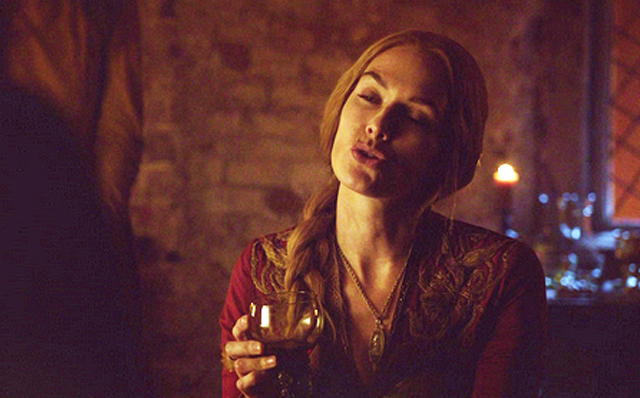 "It appears we're at an impasse," Cersei says to Tyrion. "I can't compete with you physically, and you're no match for my brains."

"You're that smart?" he asks jovially.

"Ever hear of Varys? Littlefinger? Maester Luwin?" she says.

"Really?" Tyrion replies. "In that case, I challenge you to a battle of wits."

"In one of these glasses, I have placed an odorless poison called briocane," he says. "The battle of wits has begun. It ends when you decide and we both drink, and find out who is right and who is dead."

"You've made your decision then?" Tyrion asks.

"Not remotely," she replies. "Because briocane comes from Braavos, as everyone knows. And Braavos is entirely peopled with criminals. And criminals are used to having people not trust them, as you are not trusted by me. So I can clearly not choose the wine in front of you."

"Truly, you have a dizzying intellect," Tyrion says.

"Wait till I get going!" Cersei exclaims. "Where was I?"

"Yes -- Braavos, and you must have suspected I would have known the powder's origin, so I can clearly not choose the wine in front of me."
"You're just stalling now."

"You're trying to trick me into giving away something," Tyrion says dryly. "It won't work."

"It has worked!" Cersei replies. "You've given everything away -- I know where the poison is."

"Then make your choice," Tyrion says.

Tyrion turns around to see what she was pointing at. There's nothing there. Cersei, meanwhile, has switched the goblets in secret and is now laughing.

"I'll tell you in a minute," she replies. "First, let's drink. You from your glass, and me from mine."

They both drink their wine.

"You only think I guessed wrong -- that's what's so funny!" Cersei exclaims. "I switched glasses when your back was turned. You fool."

"You did?" Tyrion asks. "Oh, crap. I can't believe that actually worked."

A perfect, highly original ending, you think. But you still need an epilogue.

Your decisions leading to this conclusion have left you with the following options.