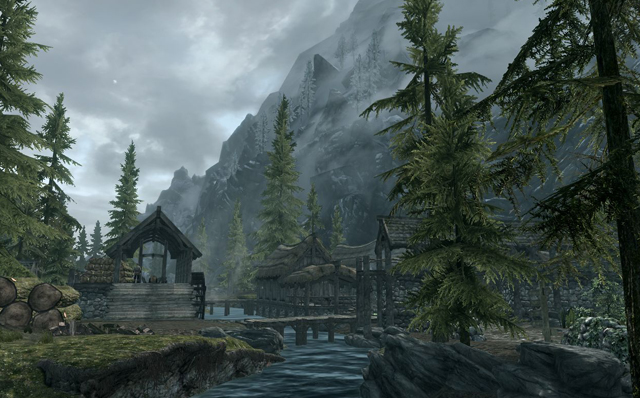 Soon, the cart jolts to a sharp stop, waking you from the nap you hadn't realized you'd been taking.

"Looks like troll work to me. Ghastly, just ghastly," you hear the driver exclaim. Careful to keep your head down, lest the man realize he'd taxied you to Riverwood without fare, you dismount the cart with a handful of Gruyere in your pocket for later. Your feet drop loudly in a puddle near the back wheel, but the driver doesn't hear it. His gaze is fixed ahead, stonily glued to what you soon realize is a mess of an elf, her body mangled and shredded well beyond what you'd recognize as good health. You hold your nostrils closed to avoid the stink as you softly approach.

The townsfolk have already begun to circle the poor elfin woman, some huffing and muttering "well, I never!"s , while others just cry

A guard nearby begins to speak, maybe to himself , maybe to you. "Third one this week, poor girl. Those dragons, methinks. I earn every septim of pay, but not for this I don't." He makes a sound somewhere between a sigh and chuckle as he spins on his heel and ambles back to town.

How terrible, you think. Even the guards won't look into this poor girl's death, it seems. You look over to the woman wailing louder than the others. Probably the mother, you consider. Poor soul.

Someone must get to the bottom of this travesty! Investigate the murder.


She's already dead; there's nothing to be done. Continue toward the shouts of "Dovahkiin."