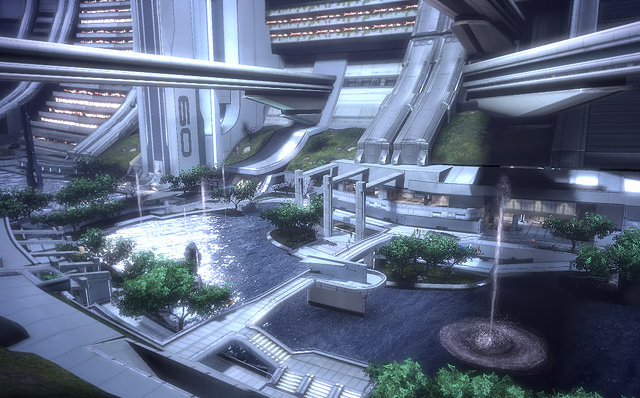 "I'm planning on doing a lot of shopping at your store," the man says, annoyingly rapping his fingers against the counter in a bid for your attention. He's not getting it.

"Uh huh," you say lazily as you flick the display of your omni-tool, and continue your crossword puzzle. What's a seven-letter word for medicinal salve? you wonder.

"So, you see," the customer continues, "perhaps we could work out some sort of discount for--"

"No discounts, no exceptions," you say without moving your eyes from the game. Bandage? Seven letters, but not exactly a salve ...

"Excuse me," the man says, his voice more stern and impertinent than before. "I don't think you understand what I'm asking. See, you wouldn't be giving me the discount for free. In exchange, I'd offer your store an endorsem--"

"But," the man replies, confusion apparent in his eyes. "I'm Commander Shepard."

Just one more Alliance muckety-muck who thinks proclaiming his rank to a civilian actually means something, you think. "Listen Commander Cheffard--"

"Well, whoever you are," you continue impatiently. "Buy something, or get lost before I call C-Sec over here. Don't think I won't."

The man opens his mouth to speak, but changes his mind. Instead, he just shakes his head at you and moves on.

Finally, you think, moving your eyes back to the crossword.

Suddenly, you realize what you were missing. Medi-gel! you think enthusiastically. You fill the seven-letter answer into your puzzle, feeling quite pleased with yourself.

The next day, you notice only a few customers shopping at your terminals, a far cry from the hordes of patrons that generally flock to what's widely known as the most successful store on the Citadel. You decide to ignore the lull for three days more, but on the fourth, decide to take action.

Shuffle your inventory. Move some lesser-known items to the top of the interface, and order some exotic items from your distributors.

Put everything on sale. You may lose some money now, but it's worth it if your customers return.

Hire an asari to dance near the terminals, and offer a free pair of tickets to the new Blasto movie for anyone who buys something worth more than 2000 credits.