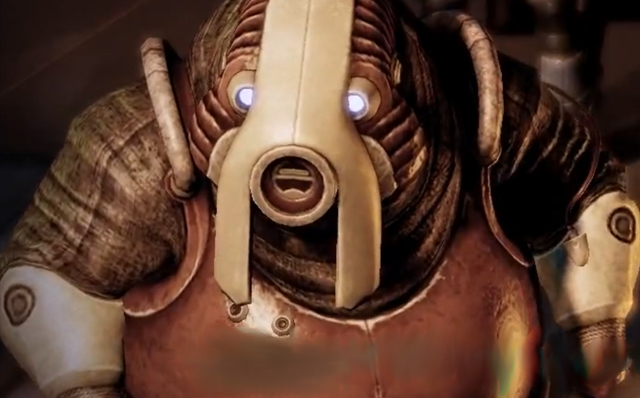 No one needs to get hurt over this, you think. You just want things to go back to normal, before this Shepard person showed up on the Citadel and mucked up the balance.

Later that night, you hear a sharp knock on the door. You open it to find two of the smallest Krogans you've ever seen, the twins Gart and Nort. You've only met them once before, during a clan Crush with C-Sec three years ago. They were dressed then as they're dressed now: wrapped in thin black cloth covering all but their eyes. Gart (or is that Nort?) gestures you with his hand to the join them in the hall. You take the pistol you keep hidden in your desk's bottom drawer and leave the room.

You follow the pair silently across the citadel, making sure to stay close to the walls and avoid the harsher spots of light between you and the server room. It isn't long before you reach a long corridor lined with security doors. One of the twins stands watch while the other uses an omni-tool on the fifth entrance on your left. You wonder how they know which door is the right one; knowing which servers correspond to which terminals is some of the most classified information on the station ... for exactly this reason.

You decide not to question them (it's not as though you'd get an answer anyway), instead choosing to nervously look both ways down the hall while they work on the door.

Finally, the door whirs open, and standing on the other side is a full squadron of C-Sec officers armed with assault rifles. You tilt your head slightly right and notice that all but one of the officers has the safety off. If it comes to it, you know whom to charge at first.

"My name is Lieutenant Bailey," one of the taller humans says in a gruff, no-nonsense voice. "Stand down, and no one has to die here today."

Submit to C-Sec. You're out-manned and out-gunned. Even krogans know a lost fight when they see one.

You aren't much of a warrior, but you're a krogan, and that counts for something. Pull the pistol from the waist of your trousers and open fire.