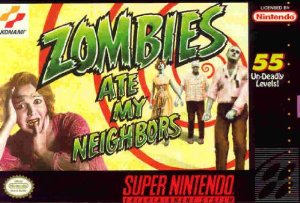 Vampires. Werewolves. Mutants. Zombies. Patrons of every entertainment industry have been consumed by the culture of the undead, embracing every Walking Dead and Twilight spin-off that is thrown at them, with creative geniuses in a race against themselves to produce the new fresh remake. However, not every filmmaker has the luxury of "money", or a "script", or "real actors". Be it a campy horror about a band rising from the dead to defeat Hitler via rock and roll, or a brilliant utilization of David Carradine's gift for unironically jamming a stake into a corpse that isn't even a vampire, the masses have spoken. And those masses want cheese with their screams.

Here's to you, unsung heroes of the "Straight to DVD" bin.

The finest B-movie video game to ever grace the world was gifted to SNES and Genesis players alike in 1993 by the powerhouse team of LucasArts and Konami. A game so unique it retains a completely appropriate cult following more than two decades after its release. I'm talking about you, Zombies Ate My Neighbors.

Paying brilliant homage to its gloriously underfunded film brethren, Zombies Ate My Neighbors is a whirling cyclone of bad cliches and even worse puns. Presenting as a run and gun meets scavenger hunt, ZAMN has managed to hold firm its grip on the souls of the 90's kids by combining awesome level design with unbelievable villains and even less believable weapons. This masterpiece crams as many corny horror stereotypes as possible into 48 levels of pure 16-bit bliss. 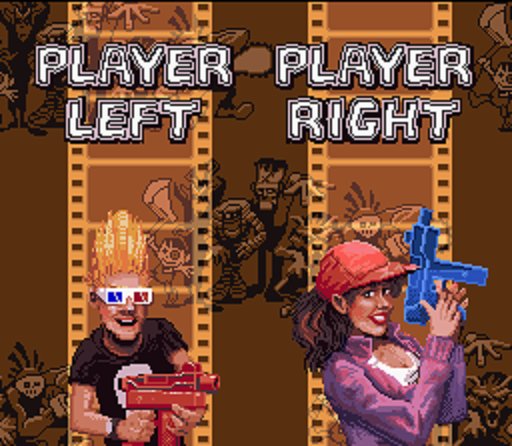 The interactive creature feature launches off with the choice between two young protagonists: the spiky haired, 3D-glasses-clad Zeke, and Julie, who dons a baseball cap while falling victim to the fashion faux pas of long sleeves with shorts. Both characters start off equipped with water guns filled with holy water, an adequate piece of weaponry for battling the unexpected hordes of zombies taking over their neighborhood. Along the way additional weapons are collected, including a bazooka, weed whacker, flame thrower, and fire extinguisher. This vast arsenal comes in handy with the appearance of more difficult enemies, like an ax-throwing infant, chainsaw-wielding masked madman, and gigantic ants. Rounding out the cast are the classic horror sweethearts of vampires (hilariously named Vlad Belmont), werewolves, mummies, and Frankenstein-like monsters.

It is the mission of the player to rescue as many neighbors as possible before the monsters get to them. Level 1 opens with 10 neighbors to save. Any lost are reflected in available rescues in future levels (if the player only rescues nine neighbors, and one dies, then only nine will be available moving forward). These potential victims range in variety from cheerleader to infant, army man to artist, trampolining ginger child to dog. Upon saving the available innocent bystanders, all of whom are inexplicably unimpressed by the demons of darkness spawning from the earth to eat their flesh, a door will magically appear, transporting the character to their next location.

Each new level opens with a title scene, depicting names like Terror in Aisle Five, Chainsaw Hedgemaze Mayhem, Gridiron Terror, and I Was A Chainsaw Maniac in a majestic stock horror font. Every stage is a veritable wonderland of twists, turns, and toxic waste. The player navigates their character through the maze-like scenery of shopping malls, Egyptian pyramids, and boat yards, on the hunt to save the neighbors from the clutches of death. An on screen map shows the area surrounding the character's immediate location, with dots appearing when they close in on a tormented soul desperate for a hero amidst the ensuing apocalypse. 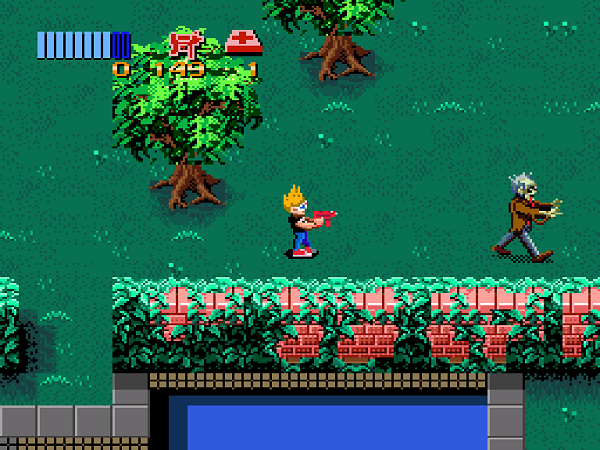 Each level has a unique soundtrack, reminiscent of classic horror melodies with a charmingly upbeat and optimistic spin. The sound effects are well executed, and blend naturally with the music instead of overpowering it. Be careful not to be fooled by ZAMN's quirky humor, however. After the first 12 levels, the difficulty picks up and, unfortunately, the game operates on a password system in lieu of progress saving. It is a feature that shows no mercy, with weapons and other additional items being nearly depleted between plays. This is arguably the singular black mark on an otherwise perfect game.

There is an intrinsic value in the ability to execute something so poorly that it becomes unintentionally endearing. The film industry has provided consumers with easily obtainable goods for satisfying their masochistic craving for subpar quality flicks. For every Exorcist there will be a dozen murderous Thanksgiving turkeys and even more homicidal ice cream men painting the walls with ketchup blood. However, for every Silent Hill 2 and Eternal Darkness, there can be only one Zombies Ate My Neighbors. And I wouldn't have it any other way.

Shine on, you crazy diamond.

* * * * *
The movies referenced in the first paragraph actually exist. They are Hard Rock Zombies and The Monster Hunter, formerly known as Natural Selection. You're welcome.


Lizzy Finnegan is a ginger gamer, with an irrational love of food trucks, and a completely rational love of bacon. More than 15 years later, she still hates the Water Temple. Puns welcome.