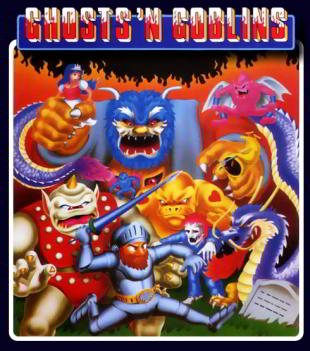 Whether you're battling enemies, solving puzzles, or racing against time, challenge is the most necessary basic component of any video game. A player wants to feel they've earned their win, and many games provide achievable challenges throughout the course of play. But then, there are those games that seemed to be developed by high ranking overlords of hell with the intent of punishing the player for an unknown offense. Games that Skynet their way to sentience, becoming self aware for just long enough to establish their deep and unadulterated hatred of the player. Games that aren't just difficult, they're unfair. The truly frustrating games. The rage quitters.

Many devout gamers reflect back on the most frustrating game moments with a bittersweet combination of nostalgia and despondence. Tales are still told of The Legend of Zelda: Ocarina of Time's Water Temple and Sonic the Hedgehog 3's Act 1 Barrel of Doom. However, it was their predecessor of several years past that redefined the industry definition of "challenging," creating one of the most frustratingly difficult gaming experiences of all time and essentially grandfathering the rage quit: Ghosts 'n Goblins.

Ghosts 'n Goblins, released on the NES in 1986, is the first of seven titles from Capcom's highly successful series by the same name. The game opens with the princess being kidnapped by Satan himself, which should have served as a warning to the player of what was to come. The player assumes the role of the brave knight Arthur, on a quest to save his beloved from the fiery grips of the evil one. You must safely guide the knight through six gates, guarded by Satan's generals, in order to reach Hades. Maneuvering through treacherous level designs - including a forest, an ice palace, caves and Satan's castle - would prove to be a challenging feat by itself. However, you have to complete each level with the restriction of only receiving two enemy hits before losing a life (the first hit removes Arthur's armor, leaving him to continue bravely as a Knight in Shining Underwear), with a time limit. If you exceed this time limit, you lose a life, and return to either the start of the level or the halfway point, if it has been reached.

Between each of the gates Arthur meets a variety of constantly spawning enemies, giving the player the honor of learning how it feels to die in the same exact spot for an hour straight. Arthur is designed in a way that, despite those sadistic red devils attacking you from all angles, he is restricted to linear attacks. Additionally, the jumps are unforgiving, allowing you no opportunity to squeak in a few extra centimeters mid-air.

The player utilizes a variety of projectile weapons in order to aid the knight on his quest. However, it is impossible to defeat the final boss without the cross weapon. If you did not retrieve the cross weapon in level 5 you are forced to replay both the 5th and 6th game levels entirely before continuing. After an arduous trek through the pixelated gates to hell, you've finally made it to Hades and are ready to assert yourself as savior of the fair maiden. Upon successfully defeating Astaroth, the final boss and second depiction of Satan, you breathe a well deserved sigh of relief. Victory is yours. 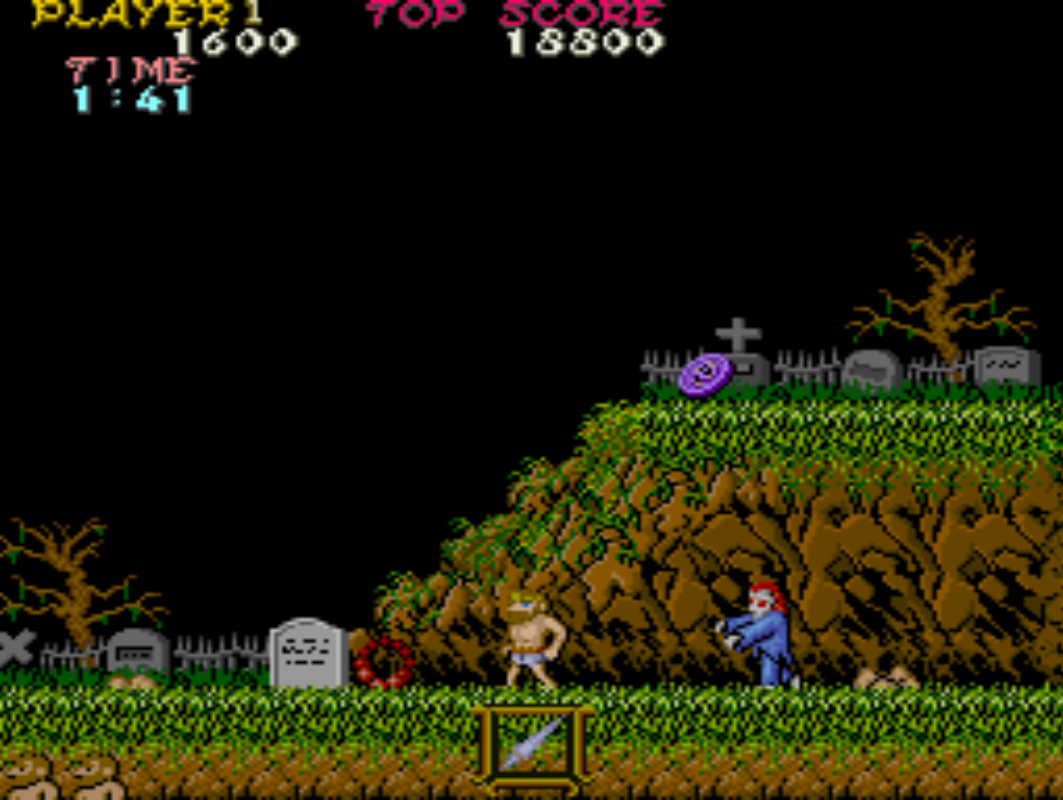 This euphoric sense of accomplishment at finally completing your quest is short lived, however. You beat the game and rescued the princess, wouldn't it all end there? No. No it would not. You are immediately greeted with the following message: "This room is an illusion and is a trap devised by Satan. Go ahead dauntlessly! Make rapid progress!" Instead of the initial assumption that you must battle Astaroth again, your knight is promptly warped back to the cemetery, the very first level, and forced to replay the game in its entirety at a higher difficulty level. It is this twist that carried through the franchise with most of Ghost 'n Goblins' successors and earned the title a spot in the unofficial Hall of Fame with the honorary declaration of "one of the most difficult games of all time."

In summation, the player is expected to complete the game by defeating enemies capable of greater degrees of attack than their own character, with a limit of two hits per life, while telepathically knowing you need to obtain a specific additional weapon two levels before it's needed, with a limited amount of time, TWICE. Oh, and you can't save your progress either. Sucker.

It's difficult to determine whether Ghosts 'n Goblins would have been celebrated for so much time without the extreme levels of sadistic difficulty. The level designs were acceptable for the game's time, and while the music was ok, the player spent entirely way too much time listening to it. The villains were interesting and constantly changing and, with a bit leniency with weapon aiming, might not have been so difficult to defeat. However, all of the ups and downs of Ghosts 'n Goblins are fiercely overshadowed by its unprecedented difficulty.

Ghosts 'n Goblins is a revolutionary title that became the inspiration for many modern games, including Maldita Castilla and the upcoming Defeated. Additionally, elements of the game's spectacular "do over" were felt in the epic adventure phenomenon, Castlevania: Symphony of the Night, with the [SPOILER] second castle twist. Despite the game's indescribable level of pure frustration and the many rage quits it inspired, it was executed so perfectly that it was the sort of game a player could not bear to walk away from for extended periods of time. As long as they had a backup controller or second copy of the game, of course.