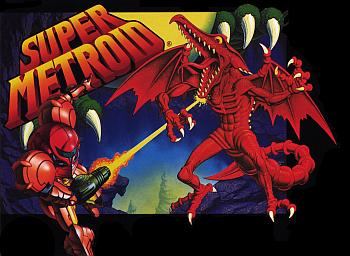 You know, I had an entire article written up about Super Metroid following my most recent replay of the game. In the article, I wrote about how depressing the game really was. I wrote about how it perfectly captured the essence of isolation, desperation, and loss. I wrote about how it was the first title of the series to portray Samus Aran as more than just an unapologetically solitary bounty hunter, but rather as a human being driven by maternal instinct on a doomed mission to rescue her adopted little metroid spawn from the dread Space Pirates.

And then I deleted the entire thing.

Let's take off our nostalgia goggles for a moment and call Super Metroid what it really is: an embarrassingly easy game.

Similar to the mindset of the most devout Final Fantasy IV fans, the love of a universally adored classic can cloud a person's perception of it. Such has been the fate of the third chapter of the Metroid series.

Super Metroid immediately follows the events of Metroid II: Return of Samus. Metroid II shadows Samus on her trek to SR388, the home planet of the life-sucking metroid species, on a mission to eradicate them. Leaving a trail of the fanged gelatinous organisms in her wake, Samus nearly completes her mission of destroying the race. However, she spares the life of the newly hatched last remaining metroid, which she affectionately refers to as "the baby," and delivers it to the Space Science Academy on Ceres for research.

Super Metroid opens with Samus responding to a distress call at Ceres Space Colony, with the research assistants being found murdered and the baby kidnapped by Ridley of the Space Pirates. Samus rushes to the planet Zebes, leaving a destroyed Ceres in her wake, defeats the guardians Ridley, Kraid, Draygon, and Phantoon, and finally enters into a multi-part battle with the biochemical supercomputer Mother Brain. Samus wins, baby dies, Zebes explodes, Samus is sad, game complete. 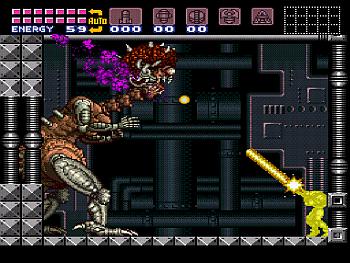 Why is this game so easy?

In Super Metroid Samus has more than double the items she found herself with in the original Metroid, including super missiles, four new beams, and mega ultra awesome power bombs. Compounded with her ridiculously high jumps and reserve energy - you know, for when real energy runs out - it was virtually predetermined that no matter what enemies or environmental challenges a player encountered, they'd be more than well equipped to prevail with minimal effort.

In addition to the ridiculous increase in items and abilities, Super Metroid also featured more sequence breaks than any other title in the franchise. Do you want to get the super missiles or ice beam early? Or maybe you'd like to avoid the baby in Tourian. Or perhaps, with the use of a simple wall jump you can get early bombs, a variety of early beams, or even access the wrecked ship for an early Gravity Suit. Oh, and you can fight two of the guardians early. With all of the easily accessible early retrieval options, Super Metroid might as well have made a Hylian-esque overworld and just allowed for all areas to be accessible at the player's discretion.

As was the case with the original Metroid, Super Metroid relied heavily on the navigation of an expansive world. Unlike the original Metroid, the newer title provided a detailed map that showed you exactly where you were, exactly where you needed to be, and exactly how to get to that point, at all times. The "map out everything" system completely robbed the game of the only true challenging features, established by its franchise predecessors - the challenge of exploring, experiencing, discovering, and not least of all, remembering.

This brings us to the final boss battle, which actually didn't exist. 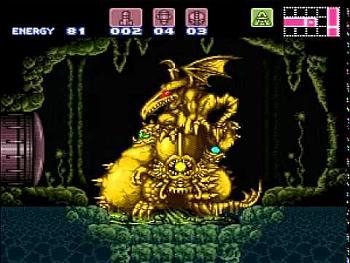 Suddenly, as is written into the actual plot, the baby appears, attacking Mother Brain and draining her energy. The baby then transfers energy to Samus. The baby is killed, and Samus starts glowing. Because whoa! She has a brand new weapon, that conveniently happens to be the only thing capable of taking out the final boss in the game - the Hyper Beam! Even if somehow you managed to lose too much energy during the "battle" the game would simply skip to the part where baby shows up anyway. After being gifted the Hyper Beam and having your energy replenished, a small handful of shots to Mother Brain's head, and voila! The boss is dead, and you've got three whole minutes to get to your ship before the planet explodes.

You're not testing your skill against the final boss. You're playing out the script of the game, and in fact have to virtually kill yourself in order to win. You quite seriously cannot lose.

Super Metroid wasn't a complete bust, as is evidenced by its ratings across a variety of sources on and off the web. The graphics for its time were well executed, the music evocative, and a compelling plot added humanity to a battle hardened warrior, showing the isolated Samus finally suffering the effects of such loneliness. Super Metroid also featured one of the coolest self-destruct sequences in video game history. In addition, the map system in the game served as the inspiration for the game design in Castlevania: Symphony of the Night, leading to the birth of the video game sub-genre Metroidvania. However, no amount of storyline or innovation can conceal the truth: one of the most beloved games of the now retro era was nearly as simple and predetermined as ColecoVision's Smurfs.*

*This is an obvious exaggeration and should be neither quoted nor taken seriously.