Rogue is arguably one of the most common influences for modern video games, particularly ones from independent developers. The title popularized dungeon crawling and procedurally generated content, spawning the birth of the "rogue-like" phenomenon that does not appear to be losing popularity, even decades after its introduction. Rampage Knights is a cooperative rogue-like beat 'em up from Rake in Grass that unapologetically draws inspiration from not only Rogue, but also Binding of Isaac and Golden Axe, with a touch of Ghosts 'N Goblins thrown in for good measure. 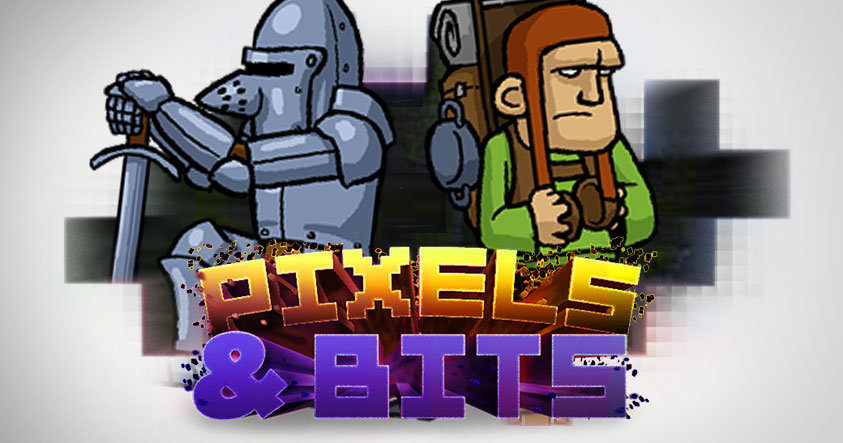 In Rampage Knights, two 'heroes' get lost in a forest on their way home from a fun day of looting and bashing, and decide to sleep off their brain fog until the following day. However, their loot is stolen as they sleep, and they get angry and vow to retrieve their hard-stolen loot and to seek revenge. Rampage Knights opens in a camp full of odd and fun NPCs. Each character offers different customizations, and in the camp the player can change their character class and appearance. The classes each have distinctive pros and cons, and are unlocked increasingly throughout the game as a player completes steam achievements.

A player begins with the basic Adventurer, but can eventually play as a number of characters. I found myself drawn primarily to the Barbarian class - a predictable choice for anyone who is familiar with my game style, as the Barbarian is a classic slice 'n dice type of character. Regardless of the class you choose, your character is constantly evolving and acquiring new skills and weapons through the progression of your time with the game. Each class, while all retaining the beat'em up feeling, is drastically different from the rest, giving each player the chance to experience the game in a unique way that feels as though it was individually customized to a specific person's play style. The character customization is neat, giving you options from anime girl to lumberjack, viking to executioner, and lots of hats. And who doesn't like hats, right?

Every play, weapons, items, buffs, monsters, landscapes, and even bosses will be different. Health, weapons, and gold are dropped throughout, and there is a steady progression of difficulty as you travel through the land, with all paths leading to the dark castle where the wizard lies in wait. Shops are randomly plopped into the game, where you can acquire new items - or even free powers.

Some of the weapons are significantly more powerful than others and allow for swift progression. However, some of these weapons strip the player of any challenge to overcome, taking away from the game's otherwise unforgiving difficulty. If you want to make an arcade-difficult game, it's important to close the unbalanced loopholes that allow for hollow progression.

The levels are broken into multi-room chapters that take a player through the forest, across the courtyard, and into the dark castle, while ensuring that the layout, enemies, and loot are constantly evolving via random generation. The random generation itself leads to more, and less, challenging combinations, making each playthrough of the game unpredictable, despite time previously spent with it.

Rampage Knights also strikes a familiar chord with two lives given during a single player runthrough, giving me flashbacks to my many passionate Ghosts 'N Goblins ragequits. The game is not a hand holder, and will make you work your ass off for every unlock, achievement, or victory.

For all the game's high points, Rampage Knights fell a bit short on the co-op dynamic. Each player begins with one life, but has the ability to come back as a ghost in order to assist their partner. If the surviving player lands enough hits, they can resurrect the dead player. It feels a bit empty, and takes away from the awesome arcade style of the singleplayer gameplay. It may serve as a neat tension-builder, but in general was disappointing.

There is a lot to love about Rampage Knights, as evidenced by the shockingly overwhelming positive reviews on Steam. While there are certain unrefined aspects to the title that could have used more consideration and tweaking, the overall experience was one of nostalgia, freshness, and the desire to play again. Each playthrough is fresh and different, changing a significant number of factors while remaining true to the title's base formula. A definite must-have for any gamer's library, and well worth the $11.99 price tag.