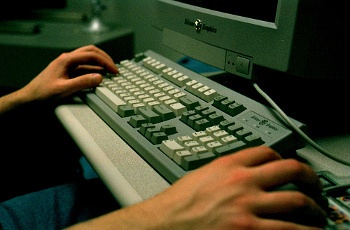 I am a delusional relic. I am a PC gamer, and I have believed for too long in an unassailable valve of my primate heart there will again come a day when the video games industry will revolve around my fickle purchasing decisions.

This is, of course, stupid.

Despite all the tenuous logical arguments I can form to champion the personal computing platform as the ideal among all gaming media, the consoles recline comfortably on their throne, crowns cocked arrogantly to one side and their bellies distended and corpulent with our cash-money. While they too will someday be toppled, most likely by their own scheming offspring raising quiet armies in the barbarian hinterlands, for now my allegiance still sides with the disgraced former liege locked high in the tower and fed only the most meager scraps.

At this point, I may or may not inadvertently be describing the film "The Man in the Iron Mask" and casting myself in a major role, perhaps Aramis or Porthos; I don't know. I can never remember who is who. The important thing to note is that instead of rallying my coup d'état, I've increasingly realized that the easier path is to just get over it.

There was a time - let's call it 2007 - where I resolved that any game released on a console where there was likely to be a PC port was either worth waiting for the port or not worth my time. I did so, stubborn and full of self-righteousness at the purity of my chosen platform. To my mind, RPG and RTS games projected onto my television screen were threadbare silhouettes of what could be accomplished by my Windows enabled computer. I could not describe any console shooter without tedious carping about the unquestionable superiority of mouse and keyboard.

All told, I was really quite intolerant and intolerable.

Closed minded is as accurate a descriptor as any, but I don't think it was willful stubbornness alone. I had simply been playing computer games since The Bard's Tale, Ultima II and Little Computer People. I may have had functional literacy in console, but my native language was computers, and like a short-tempered American lost in Paris, my default defense was one of frightened rage.

The times, they were a changin', and I was helpless to stop the tidal wave of console glee.

It all changed with the millennium. If I were forced to pick the year that the torch was passed, I choose 2000. I concede that 1995-1997 were probably the last golden years of PC gaming, and at that point we should have seen the writing on the wall, but Y2K is when I think the baton was passed. The year began with The Sims, Diablo II, Deus Ex, EverQuest: The Ruins of Kunark, Shogun: Total War and Icewind Dale.

It ended with the Playstation 2, and so too did the era of the PC.

This isn't about the death of the PC. That's a statement as silly and meaningless as saying the PC will return to its mid-90s glory. As always, the reality is not one of black and white, but degrees. The platform that once demanded the attention of the programming rock stars still simmers reliably. It's a trivial effort to come up with a dozen uniquely outstanding PC experiences I've had the past year.

But, they are certainly no longer the norm. They are not the foundation of my game playing experience.

For nine years, I have maintained my unhappy alliance with consoles, and only now, nearly a decade later, am I willing to admit that, with certain exceptions, I will probably buy more console titles in the coming years than I will PC games. And, let's face it. I'm late to the party; not the fashionable kind of late either.

Of the last 6 games I have bought, only one, Torchlight, was for the PC. The others, Borderlands, Uncharted 2, Forza III, Brutal Legend and Panzer General: Allied Assault, were all for consoles. For the remainder of the year, Dragon Age is the only PC game remaining on my list, and I have a nagging feeling that if not for the potential mods, I would just go 360 with it.

It's not that this is unusual. It's that I can't keep bemoaning my lost platform forever. It's that I don't feel that bad about the decision anymore, and as the diversity of the console platform continues to broaden, the decision to spend more time in the living room and less time in the man-cave is an easier one. While 2000 may or may not have been the last year the industry legitimately described itself in terms of PC gaming, 2009 may be the last year I describe myself first as a PC gamer.

Sean Sands is a writer, gamer, husband and father. He is also regularly featured on the Gamers with Jobs Conference Call podcast. It probably says something about him that until Torchlight, his most played game on the PC this month was online poker.