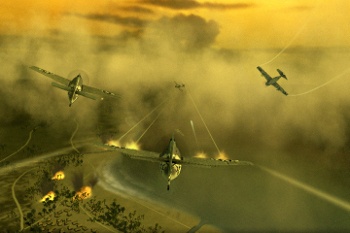 To celebrate Pearl Harbor day, Ubisoft will be releasing a free DLC pack for Blazing Angels II. The pack focuses on the experiences of Pearl Harbor through the eyes of a shore-bound sailor on the day of the Japanese attack.

A press release announced further details, "You play as Howard Mason, a grizzled sailor on shore-leave who is visiting his family for the first time in many years. Throughout the two two-hour campaign, you experience the thrill and excitement of powerlessly watching your family and friends die in slow motion cinematics. The download pack boasts one of the best dismemberment physics engines available since Brother's in Arms."

This DLC will be available December 7th, and Ubisoft hopes that it will be better received than last year's promotion - a 50 gamer point Ride the Bomb achievement to commemorate the end of the war in the Pacific.