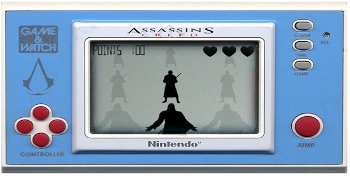 Remember Nintendo's handheld before the Gameboy? No? Remember asking someone for the time just so you could watch him pull out a bitchin' flip-screen LED Donkey Kong game and give you the time punctuated with the word "dude?" No? Me either, but that's not stopping Nintendo from resurrecting their Game & Watch handhelds. The games rumored to be getting their very own Game & Watch's are Wii Winter Sports, Assassin's Creed II and Guitar Hero. I can't think of anything that brings more joy to children than monochrome games and telling time. We've included leaked pictures of Assassin's Creed II for Game & Watch. We promise we'll do our best to get you more screens as this story unfolds.