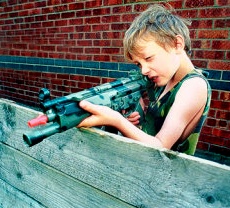 Sources close to Activision say that the game publisher is keeping true to their policy of only releasing titles that have "sequel potential." An internal memo confirms several titles destined for release in 2010. Many of the games are associated, at least loosely, with already existing intellectual properties. Look for yourself:
Call of Doody - this exclusive Wii title targets girls and WWII enthusiasts in an attempt to break Ubisoft's hold over these key demographics. The game divides gameplay into raising your baby and World War II themed poo-throwing mini-games. Call of Doody also has a campaign mode entitled: The Battle of The (Diaper) Bulge.

Spacebar Hero - Following the lead of games that boast one button gameplay comes a rhythm game featuring a unique controller which mimics the spacebar on a computer. Users watch text scroll across the screen and push the spacebar at the correct time to make sure text isn't garbled by incorrect spacing. If the game sells well, Activision may also look into Scroll Lock Hero.

World of Stoehrcraft - An MMO based on the career of professional squash player Isabelle Stoehr. Players take on the role of Orcs or Elves and engage in brutal squash games. The story follows Isabelle's 1996 rise to fame, but takes some liberties when she becomes the Ice Queen of Durdureth. An expansion pack will shortly follow, which covers the saga of Stoehr winning the runner-up position at WISPA and consequently being trapped in the Solar Cage by the Magus Threerborne Flamerenderer.