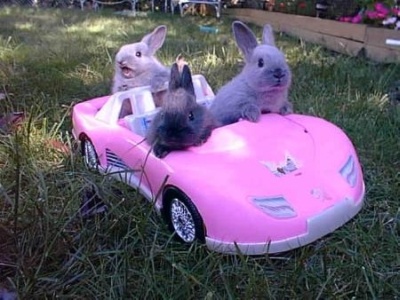 A PETA representative has revealed that the oft-controversial animal rights group is rethinking its strategy for a game they had been working on as its answer to animal hunting games such as Cabela's Big Game Hunter.

Richard Ding, lead producer on the project, told Reliable Source, "We wanted to create a game where people are the ones being hunted and gamers are exposed to the plight of animals. During playtesting, however, we quickly learned that testers actually had less compunction killing people than animals."

Mr.Ding continued, "This is problematic because we gave players the choice between cutting a nun in half with a bonesaw and shooting an endangered manatee, and nearly all players chose the former. This leads us to believe that our time would have been better spent simply making a game where players are forced to shoot unrealistically cute animals, in hopes that they will feel guilty and change their perceptions on how they treat animals."

An updated, version of Bunny Genocide will be available soon for the Wii and Xbox360. Sorry, PS3 owners; if you want to be lectured by sophistic game designers, you will have to turn on Metal Gear Solid 4 instead.

Marion Cox is a weekly contributor, and you can follow his adventures in Dragon Age here.