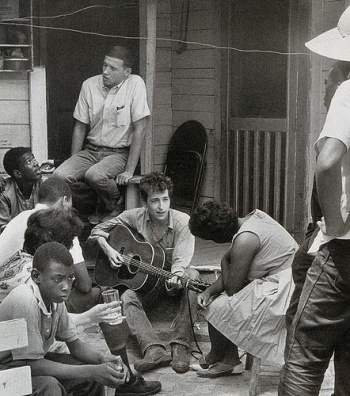 Martin Beryl, a forty-something game designer, wants to bring Bob Dylan to Singstar. Sources said that he had the idea after attending a Japanese Karaoke night with his family.

In his Livejournal blog, Beryl says, "I mean, as I watched my teenage daughter trying to sing Band of the Hand I realized that the 60s had so much better music than the crap these days. Sure, Dylan was nearly incomprehensible at times, but at least he was trying to say something. Listen to any one of Lady Gaga's songs. What is a 'disco stick' anyway? It's complete nonsense. Imagine how amazing it would be to share one of the most influential singer/songwriters of the 60s with today's youth market."

"Of course there are challenges to overcome," continued Beryl. Dylan's unique vocal stylings may take some remastering to grab the attention of our demographic of talentless teens in search of instant gratification. Maybe we should get John Mayer to do some covers. That would sell, right?"