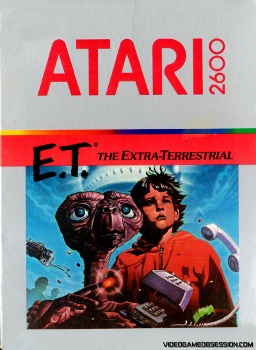 A bell sounded in my head. "That sounds like E.T. Hey, did you work on that?"

He went on as if he hadn't even heard me and moments later I forgot I'd even asked the question. "Of course, not everyone failed, the Japanese had won without us even knowing. Two years later, the NES made its debut in the US. And if you look at the signs now, you'll see that another doomsday is right around the corner."

Howie shook his head, "Don't tell me you haven't read about the Mayan calendar predicting the videogame crash of 2012?"

"Twenty-twelve," I muttered. That was definitely not as fun to say '83 or even '82. "No, I guess I missed that issue of EGM. Hey, wait a second, doesn't that calendar predict the end of the world?"

"It's not that simple," Howie said. "The prophecy states that a brilliant independent game designer will work on a game that inspires an entire generation of children to pursue platonic relationships with emotionally unavailable loners. They will turn into forty-something adults who have forgone sex to take care of their multiple cats, causing a great depopulation and eventually the human race will dwindle and die leaving only massive cat colonies and bad vampire poetry as only surviving human legacy. There are many theories on the specific game, but I suspect it's going to be based on a wildly popular movie."

"Sounds like a Twilight MMOG, or something," I mused.

He shook his head solemnly and didn't say a word. Something about driving through the wasteland of the Nevada desert seemed to emphasize his point. Maybe he was a kook, but driving through the desert, I couldn't help but feel the vast emptiness of a world dominated by the iron rule of domesticated cats.

We drove in silence as I mulled over his words. Was he a lunatic living in a world of self-created fear, or did he have a point? Could there be forces beyond my comprehension directing the game market? Were we headed for another videogame crash in 2012? The signs were there: economy in the shitter, industry giants like EA scrambling to salvage their failing businesses. Even a giant franchise like Madden selling poorly for the third straight year in a row while more and more developers turn to flash games to make money.

A few hours later, he let me out in a small border town of Utah without a word. He had shared his story with me, that was good enough, he didn't need to say more. He pulled out of the parking lot and blew his horn twice - a sign of respect amongst truckers. "Good luck, Howie," I said. I watched his truck filled with chicken hearts turn into a speck amongst the snow capped mountains of Utah.

Overhead, a shooting star lit up the sky, leaving a fiery trail. Man, E.T. was a really crappy game.

Marion Cox always cheated at Choose Your Own Adventure books.