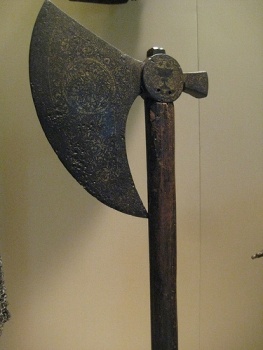 "That's Wyskowski to you," he said. My dad was obviously taking this very seriously. "I'd like to stab the dwarf with the girl's name who just interrupted my drinking."

"Dad, you can't do that..." I trailed off, trying to come up with a reason why my father shouldn't commit filicide.

Dad looked perplexedly at the pile of green plastic shards before him. Jim started explaining the different polyhedral dice before finally giving up and passing him the correct one.

Jim shook his head. "Suddenly, the dwarf who had been shouting for allegiance to defeat the goblin menace has fallen to the floor, a giant battle axe sticking in his back."

"Can I take his stuff?" Tennyson asked.

"For fuck's sake," I said in frustration as I got up from the table. "Dad, you killed me."

But Marion Cox Sr. was not paying attention to me. Instead, he actually seemed to be enjoying himself. "I am leading this squad now. You maggots better get your shit together or you'll wind up here like this sissy egg-sucking dwarf. Now, we have some commies to kill, who here is with me?"

Tennyson and Thomas glanced nervously at me, and then at my father who looked like he was ready to punch both of them in the teeth if they didn't listen to him.

"Fine," I said, standing up from the table. Maybe I was too old for this anyway. Nothing was going to return me to my high school days, and the truth is that I probably misremembered how awesome they were anyway. Dad seemed to be having a good time ordering people around; who was I to deny him the simple joys of bossing around my socially inept friends?

Later that night, the band assembled by the dwarf Wyskowski defeated the goblins, but not before he transformed the two least dangerous people in Springfield into trained killers. It didn't end with the goblins though. He somehow convinced the party to burn a Halfling village to the ground for harboring the enemy, and ended the session by proclaiming himself Wyskowski, King of the Savages.

I suppose that next session I'll be playing Charlie Sheen the Elven ranger sent out to end his madness.

Marion Cox didn't waste his entire evening; he earned 100xp for filling out his W4 form.