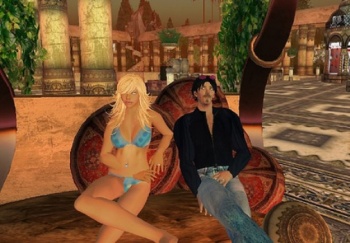 I decided that I had enough of wanton limb hacking and snuff. Needing an excuse to ignore the horrific flood of brutal text, I quickly buried my nose in a ten-page tutorial. I retrieved my head and decided to look for a less deviant area of Second Life. I probably walked around for an hour saying hello to passersby with no one even looking in my direction. Finally, in desperation, while standing on a rainbow marshmallow horse farm, I shouted the world's least used pickup line ever, "I am not looking for sex, I just want to talk to someone who won't impregnate me!"

Almost instantly I received a reply from a fine young woman named Delilah Parkour, "Hey honey, you looking for a date?"

"Kind of - I just need someone to talk to - my friends are out of town and my dad is off his anti-psychotic meds again." I was hoping that she wouldn't immediately ignore me, like I would have had our positions been reversed.

"Why don't you tell me about it? Only 600 LS," she said, referring to the game's currency.

"What's that?" I asked, suspecting that I already knew the answer.

She emoted a chuckle, "You're new here, aren't you?"

I resented the implication. "You're a prostitute, aren't you?"

I regretted typing it instantly. She had been the only person kind enough to talk to me in this wasteland of hot pink, lime green and teal signboards. If she ignored me now, I might as well just give up on human contact for the entire weekend.

But to my surprise she answered me with, "Do you want me to be?"

As I was entering my credit card information, I realized how bad this would appear to anyone who didn't fully understand how lonely it can be when you haven't known the touch of another human being for a long time. I mean, I'd spent money on much worse things. There was that waffle press that's still in the box, and a bunch of cashmere scarves that fell apart only a week after I bought them.

After paying her, we talked for over 30 minutes. I mostly discussed my divorce and all of the other subjects that my friends stopped listening to long ago. Delilah really understood, at least as long as she was paid. All in all, it cost me about 12 dollars for her time. I felt a lot better when I got that shit off my chest, and I found comfort in knowing that she was bound to secrecy by the prostitute-client confidentiality agreement.

I went into Second Life not knowing what to expect, and emerged scared as hell of all the dark scary things people don't dare share with anyone offline. It isn't likely that I'll return.

I've decided to give this local knitting circle a shot instead. My friend Jim says the male to female ratio at those things is awesome, plus I need a new scarf.

I seem to have lost all of mine.

Marion Cox wonders if you have any friends who are into bald, middle aged game journalists. (Call me!)