Tyrell leads me out onto a gigantic wooden scaffolding, and we descend down into the canyon.

"This is a lot of stairs," I remark about halfway down. "Did families really have to climb this whole thing to enter and leave the park?"

Tyrell pauses for a moment. "Well ... " he says after he's caught his breath again, "After climbing all the way down folks would be good and thirsty for a lemonade."

"I see!" I reply with a knowing smile, "So you've got a lemonade stand at the bottom?"

Tyrell's looks sort of excited. "That would have been a really good idea!"

We get down to the bottom of the steps and I smash up the deranged robots that swarm our position. I can tell that seeing them destroyed pains the man a bit, but he's he's polite about it and thanks me for doing what needs to be done. 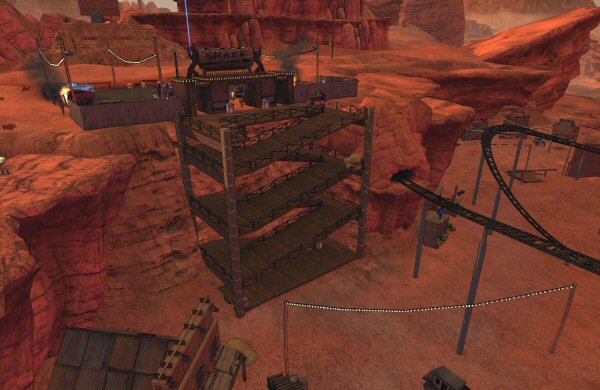 We walk along through rows of Old West building facades. They're sturdy and give the place a bit of "Old West" flavor, which is only slightly undermined by being at the bottom of a hole before being majorly undermined by the robots.

Snake Gulch. I've said before that this is the worst part of the game. Worst setting. Worst quests. Worst play area. Worst writing.

When I'd criticize the setting, people would accuse me of having never seen Westworld. Which is true. Never saw it. But pointing out that this part of the game is pilfering a class work of science fiction is a pretty piss poor defense. It's actually just another strike against it.

No matter how great the movie Aliens is, it doesn't make Battlefield Earth any less horrible just because they both have space aliens in them. If something sucks, it still sucks even if the same idea was done well elsewhere.

"So what did people do here before the robots went bad?" I ask after we've walked past about a quarter-mile of fake buildings. I've been smashing up groups of robots as we walked. These fights have done a good job of dividing the long uncomfortable silence into several smaller ones.

Tyrell is excited again, "Look up!"

I look, and I can see part of a rollercoster arching overhead.

"Oh! So you have rollercoasters here?"

"That one, yeah," he says proudly. "Let's head on down," he says with a grin after I've smashed another group of robots.

It seems we've arrived at another three-story staircase. Now, I could fly to the bottom if I wanted, but it seems like that would be sort of rude to poor Tyrell. That, and I want to be nearby in case he passes out from exhaustion and the desert heat.

"So ... you just have the one ride?" I ask as gently as possible once we're safely on the ground, he's caught his breath, and I've fought a couple dozen more cowboy robots.

Tyrell stops to think for a long moment. I wonder if he's forgotten the question when he finally replies, "Did I mention the rollercoaster yet?"

"Yes. You showed me that one."

"Then I guess that's pretty much it." 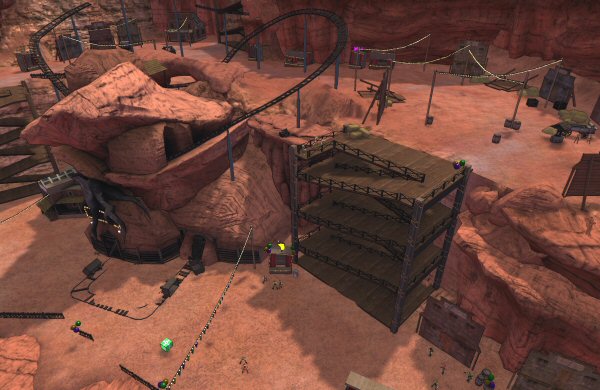 "So did you get many visitors?" I ask while looking up at the sheer cliff walls on either side of us, the flights of stairs, and the lack of anything here at the bottom in the way of refreshments or bathrooms.

"Why sure!" he shouts, as if I'd just asked if it sometimes got a little hot around here. "We had tons of guests before all these robot troubles."

"Really? So families didn't have any trouble with the stairs?" I imagine it would have been pretty hard on kids when it came time to leave. Or if anyone needed a drink. Or to go to the bathroom.

"Well, it wasn't so much families. It was mostly just fellers from that campground they put up over yonder." He nods towards "yonder," but all I see is the imposing rock wall and a couple of murderous robots milling about. Then I realize the campgrounds he's talking about are probably outside of our canyon. Did I miss something when I scouted the area? To the east is the super villain prison and to the west is the irradiated wasteland. The only other place nearby is...