"Whatever you want. You're the boss, remember? Some warlocks like to personalize us with a cool-sounding name. One guy I used to work for - you wouldn't know him, 'nother plane of existence - used to call me 'Direflame, The Devourer of Worlds.'"

"Nah. The name was for show," I shout over the death cries and crackling flames.

Norman begins beating a Kobold with his staff. "So what's your actual name?" he asks once it stops moving.

"You want to know my real name?"

"Mother says it's polite to use people's names," Norman says through clenched teeth as he rips a Kobold's soul apart with a bolt of shadow magic.

"Demons aren't really picky when it comes to manners, but if you really want to know I'll tell you," I say. Then I tell him my name: 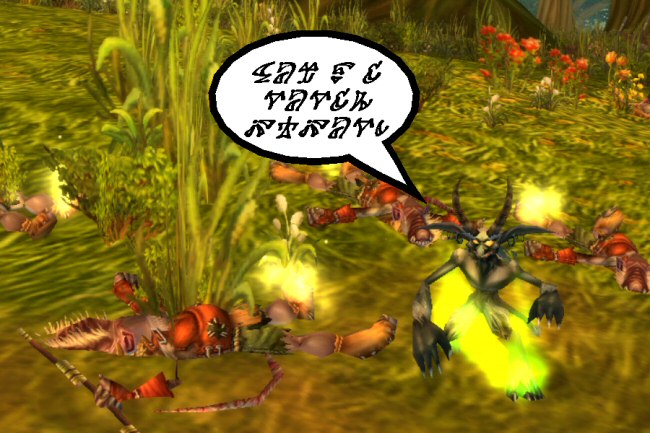 After I've said it he makes a face. Did you say, "Ghaxxxxb (wheeze) sssssshtaaaaaahbt?"

I shake my head, "Ugh. Your pronunciation is terrible. You should try to gargle a little pitch in the back of your throat near the end."

"I don't think I have pitch," he says as he slams his staff down on the head of a burning Kobold.

"Or spit. Whatever you got in there."

"You also need to hiss more during the middle part. Try to vent a little steam out of your neck holes."

"I don't have any ... Look, is that big long thing really your name, are are you pulling my leg?"

"Well, my full name is thirteen stanzas long and chanting the whole thing would boil your heart. But that bit I gave you is what my friends call me."

"So your friends call you Ghoxbstabt?" He coughs a bit at the end of butchering my name. Partly because he's not doing the gargle right, and partly because of all the smoke from the Kobols we're roasting.

"Terrible," I tell him. "You know what might help? If you punctured the front of your throat and then tried to say it."

"I think the vendor over by the church there sells knives."

"How about I just call you Gobstab?" 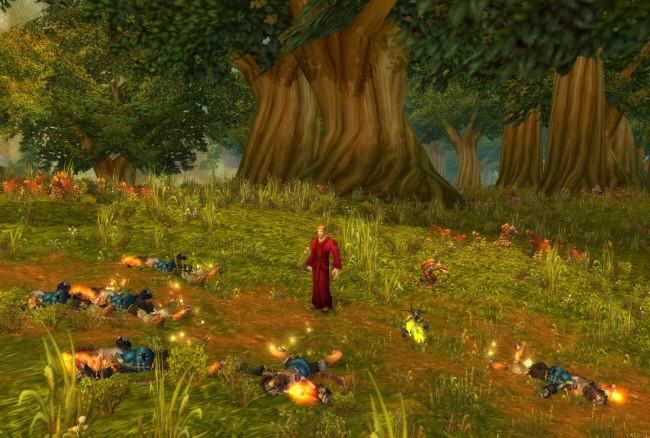 I take a look around the pile of dead bodies, "McBride says these Kobolds are different, but I gotta say they smell exactly the same when you roast them. Exactly."

"You should let up on that guy. He's a respected servant of the people."

"He's a slacker who has just conned you into doing his guard-type duties for him."

"You'll see. You demons think that the servants of Light are just like you except we wear white."

"You know what I mean! We're different from you! You see people helping each other and assume it's just tricks and lies. You don't understand about people caring for each other. Our way is different."

"I never said we were the same. Your way is a huge pain in the ass."

So Norman goes back to the church to get paid and I wait outside because I don't want to get Paladin cooties.