We're still in the newbie are of the game, where enemies don't attack first. Which can be a little odd sometimes.

"Hey genius," I say to him. "When the guard asked you for the bandanas, he was asking you to kill these guys."

Norman looks around the field in dismay, "But ... killing? People? Shouldn't I try to arrest them first? Or something? I don't know. We haven't even seen them committing any crimes!"

"So you're saying the town guards here are corrupt and would ask you to kill these people in cold blood?

"Then these folks must be guilty of something punishable by death."

"Either that or the guard is sending you to murder people. For no reason." 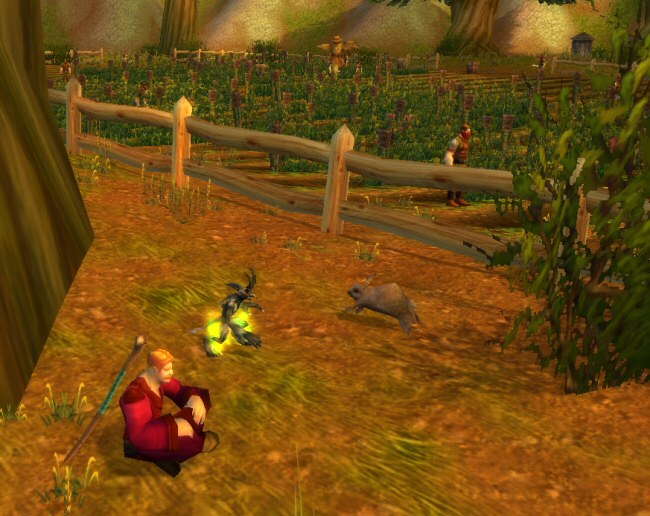 So Norman has a little nervous breakdown, recovers, snivels a little, pouts under a tree, gets angry, throws a fit, calms down, and finally gets his act together. We go out and start killing bandits.

Like all mortals, he gets a little freaked out by the first time he kills someone. But by the eighth one he's perked back up and is throwing shadow bolts right at their bandana-wearing faces.

You need eight bandanas, and you have to kill exactly eight mobs to get them. Enjoy it while it lasts newbie, because that's all going to change real soon. 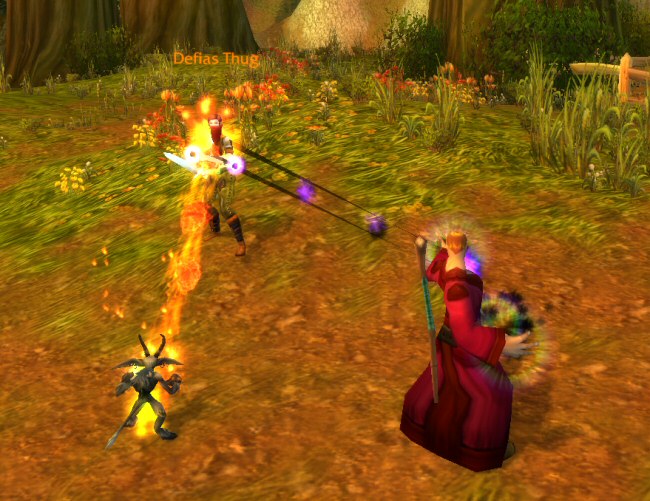 We return to Deputy Buckethead and Norm turns in his bandanas.

"There," he says. "Eight of them. You know, there are still a lot of them over there. Just please don't ask me to do any more messy stuff."

The guard looks down at a little to-do list he's written down. Just about everything on it has been checked off. His head nods somewhere inside of his cavernous helmet, "Right. Last job. Garrick Padfoot is a cutthroat who has plagued our farmers and merchants for weeks."

Norman smiles, "Ah! You want me to use my supernatural powers to locate him so you can bring him to justice! Do you have any clues to get me-"

"Actually, we know right where he is. He's standing around in the vineyard."

"That's the place! Just go over there and bring me his head to collect the bounty."

Norman goes white. "His ... head? Do you mean that figuratively, or are you really suggesting that I-"

The guard gives him a little shove in the direction of the vineyard, "Off you go now. Good luck." 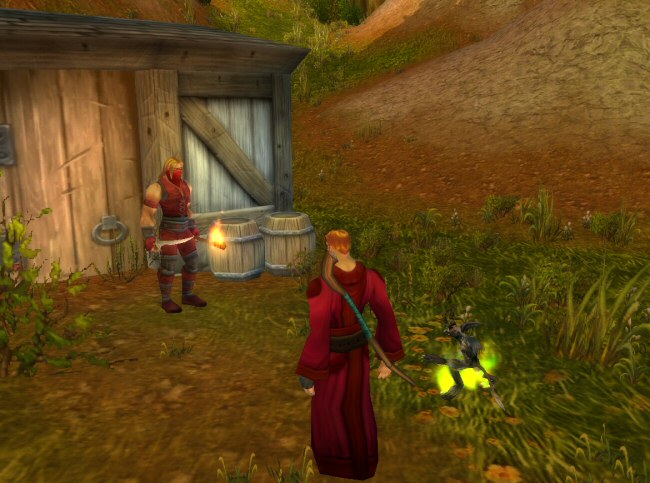 "Soooo. Hi there," Norman says to Padfoot after we've effortlessly strolled by his men and up to his not-very-secret hideout.