Norman stands there looking into the valley for a few minutes. "How could the Marshal not know about this?" 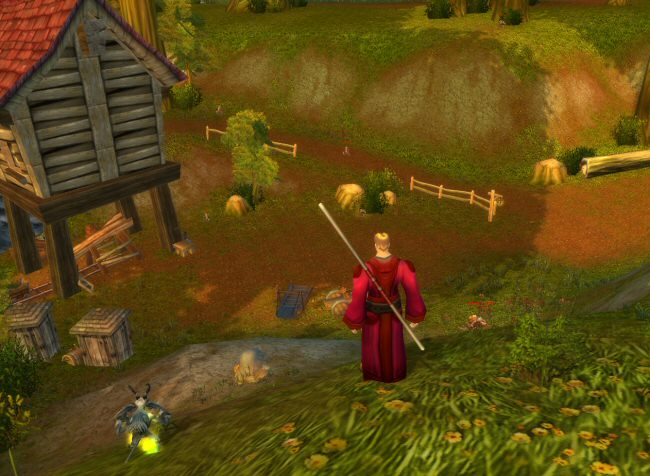 "Who cares? Let's get our murder on," I say with a shrug.

We work our way down into the valley, bludgeoning burning Kobolds before destroying their life essence with spinning tendrils of shadow magic. Once in a while Norman has to finish one off with a crack to the skull, just to keep things interesting. After they stop twitching he rummages through their pockets and swipes their candles. Once in a while he even finds a handful of gold dust.

At the bottom of the hill is a scattered collection of rusty mining tools and litter gathered around the yawning entrance. A mangled set of tracks spills out of the opening like a lolling tongue. As we draw near, the smell of stagnant water and filth replaces the smell of burning fur and flesh.

"I'm really glad to see you coming around," I say as we enter the mine.

A Kobold spots us and shrieks a battlecry in his adorable little high-pitched voice. He waves a cudgel over his head, threatening to give Norman's kneecaps a savage bruising. Norman stops him short with a knock to the head before the little rat is engulfed in demonic flame. 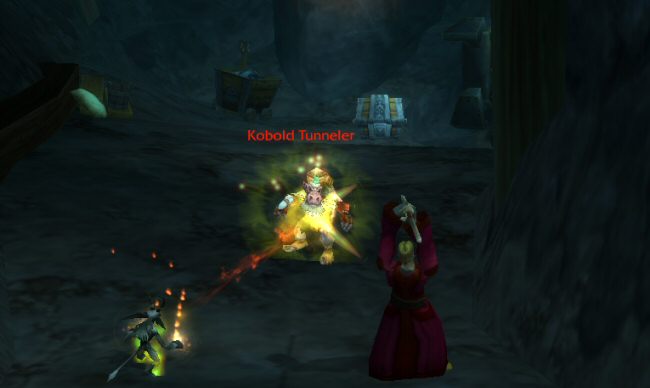 "To evil!" I say as I call forth another wad of fire. "I thought you were committed to that other stuff. Good and such."

"I am!" he says indignantly as he knocks the teeth clean out of another Kobold with a perfectly executed swing.

"Then why are you driving these Kobolds from their home? Don't get me wrong. I am 100% in favor of this, but I didn't think you were up for it."

"This isn't their home," Norman protests. "This place belongs to humans."

Another pair of Kobolds run in to rescue their fallen kin and end up getting added to the fire.

"Really? So how come no humans come here? I mean the guards have no idea about the place and the townsfolk just want you to come here and rob these guys, so ..." 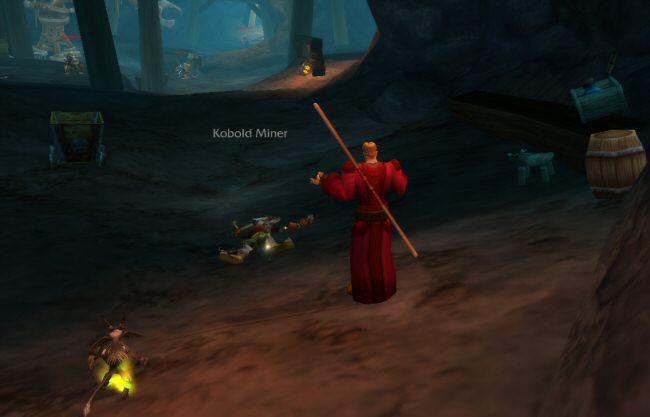 "Maybe the Kobolds ... took control? Somehow?" Norman stops and looks back the passage doubtfully. Behind us is a trail of smoking Kobold rat-man.

"And nobody noticed? Where are the miners?"

"Then where are the miner's bodies?"

"The kobolds ate them?" he says with somewhat less certainty.

"Let's say you're right. Let's say that these tiny little men that you and I are killing all by ourselves somehow overpowered a dozen or more humans armed with pickaxes, and killed them all. Let's also assume the Kobolds somehow consumed them entirely, even their bones and clothing so that no evidence remained. Before this implausible battle took place, where did the miners live?"

Norman scoops the last few bits of candle and gold dust into his bag as he thinks it over. Finally he answers, "I guess they lived in town somewhere."

"By 'in town' do you mean they all lived with the backsmith, or at the inn?", I ask patiently. "Because those are the only buildings in 'town'."

Norman scratches the back of his head, as if the bafflement was simply something he had caught in his hair.