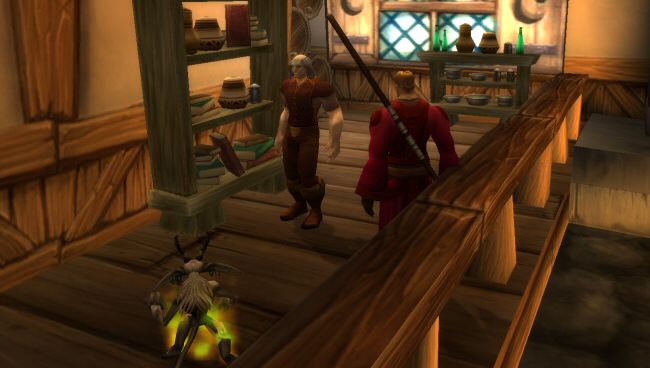 "Here it comes," Norman says under his breath.

"You won't actually find it in the ocean if you go looking for it."

"So where would I find it?"

"Murlocs sometimes carry it. See if you can get some from them. There's a Murloc village in the lake just east of us."

Yeah, the only place in the universe you can get crystal kelp is from Murlocs, and only when you're doing this quest. There are a lot of spots like this in the game where you have to go and gather resources that only exist while you're looking for them.

I've often thought it would be interesting if you made an online game where everything was available all the time. If crystal kelp really did appear along the coast and Murlocs really did drop it, whether you needed it or not. It would be interesting to see how many players would naturally revert to adventure game behavior, scarfing up everything needlessly and hauling around armloads of random crap.

Oblivion did this, but that was a single-player game and it tracked inventory by weight instead of item slots. It becomes more of a trade-off if every new weed, animal part, or knickknack you find takes up one of your precious inventory slots. Sure, doing so might let you instantly fulfill a quest at some point, but it's more likely you'll just lug it around for the next 20 levels for no benefit. This would be especially true if the designers placed a lot of extra useless items in the game.

I don't actually know if that would make the game better, but it would be an interesting experiment to see how people behave. 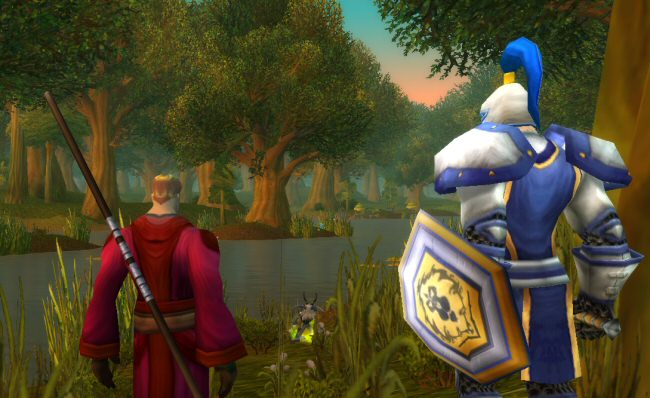 The lake. Filled with filthy Murlocs. There's even a guard standing by the lake, looking right at the little buggers.

"Okay, let's get this over with," Norman grumbles.

"I gave you some inside info on the demons, now you have to tell me what the deal is with your mom."

"Okay," Norman sighs, "My mother is Lady Agatha Lightgiver, Exalted Paladin of some order or other."

"Your mother is a paladin?"

"Lady Lightgiver is somewhat famous around here. She's about as anti-demon as they come. And she's ... strict."

"Which explains why you don't want her to know about this whole Warlock business you're into."

"I lied about taking a cookie when I was a kid and she chased me around the house with a magic hammer. A cookie! I can't even imagine what she'd do if she found out about this."

"Well your secret is safe with me," I assure him. "Nobody needs to know about this except you, me, and these Murlocs we're about to murder." 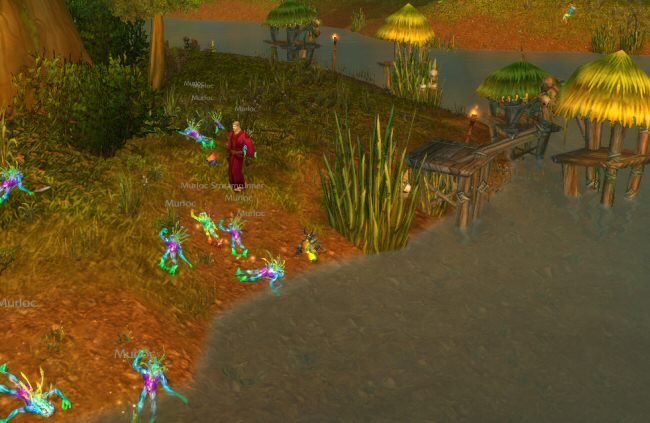 A few minutes later we have a nice pile of corpses at our feet.

"So ... how many villages have you wiped out now?"

"Those were mines, not villages. And this doesn't count. Kobolds are vermin, but Murlocs are evil."

"Really? What makes them evil?"

"Well," says Norman as he pats down the corpses, looking for kelp. "They're aggressive and mean. They do evil things."

"Yes. They're murderers and thieves."

"Wow. So you're saying that these little guys are so evil they might charge into a human village and kill everything that moves just to acquire a few leaves of seaweed from you?"

"Well, they would never do anything that bad, but I think--" His voice trails off and he looks down at the kelp in his hands. "Curse you demon, stop trying to confuse me."

"I'm not confusing you. You're doing that to yourself. I'm just pointing it out."

We head back and speak to Candlejerk again. He takes the kelp from us and whips up a potion for Maybell.