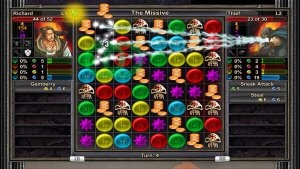 If you haven't played it, Puzzle Quest is like the spawn of an unholy union between Bejeweled and Final Fantasy; all the pick up and play appeal of a casual game with all the stamina of a roleplaying game, and all the addictiveness of both. It's like drinking coffee laced with a shot of espresso with a Red Bull backer. Playing the game is almost exactly like playing Bejeweled: You swap out jewels to power up attacks and then cast spells to defeat your opponents. And although this makes no sense in real-world terms, it's incredibly fun to play. By defeating enemies, you grow stronger, explore more of the world, uncover artifacts and then rinse and repeat in increasing levels of difficulty. And there's crafting.

I spent an hour yesterday training my giant spider. He was perfectly good right out of the factory, but if his levels go up, I can avoid random encounters on my way to actual story quests. But leveling up the spider is hard; you have to fight him, and each time he levels up, he gets stronger. And the matches are timed, and the time decreases the stronger the spider gets. If you don't match the gems in time, you lose health. Lose enough, and it's game over. So I sat there for an hour with a clock ticking in my ear, hurriedly matching gems, fighting a battle over and over that got harder each time - grinding, in other words - ostensibly to avoid the annoyance of … grinding. These are the moments when self-awareness is a curse.

I used to laugh at colleagues, friends and acquaintances who obsessively play MMOGs like WoW, logging on just to grind a level or two, acquire more gold or, heaven forfend, an epic mount. Now I realize I’m no different. Or, perhaps, worse. WoW at least is a premium product. I'm like the guy in the trailer park making bathtub meth and looking down on folks who snort cocaine.

Those of us in, as the PR flaks call it, "the enthusiast community" scoff at cries that videogames are addictive, writing off the news reports and morning variety show paranoia as yellow journalism at best, or perhaps a lack of perspective. And yet they aren't. Videogames are addictive. Games like Puzzle Quest are designed specifically to engage the player for as long as possible, setting up short-attention span challenges and offering frequent rewards. It's not an accident you feel as if you can't turn them off - they're made to make you feel that way. But so what?