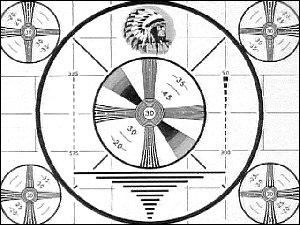 I called my mother last night. Willingly. I watched Miss America. I read a magazine. I ran. These are not typical Sunday afternoon/evening activities, but a dire shortage of television, film and videogame content has reduced me to scraping the bottom of the barrel. The Writer's Union, like a crack Al Qeada bomb team, has targeted their strike at the most vulnerable spot in the entertainment infrastructure - the few months at the beginning of the year when nothing much new happens - and in so doing they've robbed us of even the comfort of our old, familiar standbys. Like ER. No new ER? There's been a new episode of ER at least every third week for 10 years. I don't even watch ER anymore, but its absence means something nonetheless. A lack of ER isn't simply an indicator of the apocalypse, a lack of ER is the apocalypse.

With the holiday released films still awaiting their digital second act, my Netflix queue may as well be empty for all the plastic, optical joy it represents. New films won't hit DVD until around Easter, and new games are hit or miss until summer, with most major producers having ramped their production to hit the holiday season, or waved off their landing for some as yet undetermined future point. And television, the traditional savior of these bleak periods, is dead in the water, subdued like an oil tanker swarmed by Greenpeace zodiacs. Ah, television, you've betrayed us the most, as you, in turn have been betrayed by the warring parties in the writer's epic struggle; a struggle worthy of immortalization in the form of some written word-dependent art form or another. If only.

I should be elated that writers, long the butt of every Hollywood joke, long abused, long suffering and always painfully overwritten are finally now being acknowledged as the true cause of something. As any writer worth his salt knows, writers are the cause of almost everything. Movies, television, plays, radio, advertising, State of the Union addresses (which reminds me, will the President have to cross picket lines to deliver his performance tonight?), magazines, books, books on tape, sermons, salutations and sex jokes. From the pop culture references you're quoting at the water cooler to the semi-romantic platitudes you're whispering to your girl, chances are almost everything you hear see or say originated in the mind of a writer. And now, thanks to the power of collective bargaining, we're responsible for the end of the world.

Russ Pitts is an associate editor for The Escapist. His blog can be found at www.falsegravity.com. Smile and Nod appears here every Monday.