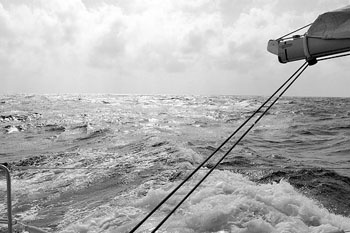 Out on the water, I could finally see the storm clouds approaching. Unfortunately, the wind wasn't going my way. Before gasoline and steam, the world was driven by horses and wind, necessarily green. Unfortunately, wind doesn't always do what you want it to. Sometimes it doesn't blow at all, becalming your boat. Other times it's blowing so well in one direction, it's hard to go in another. On these occasions, one must tack, zig zagging to the limits of the boat's ability to sail into the wind in one direction, then veering in another. It's hard work, and slow, but it'll get you there. On still other days, however, the wind seems to come from multiple directions at once, eddying off unusual land formations, swirling around a harbor or, as on this day, driven by an approaching storm to do both.

About the time I noticed the approaching clouds I decided it was time to call it a day. I'd been alternating sailing downwind - screaming across the water, head thrown back, face locked in a rigor of glee - with slowly tacking back toward the safety of shore. I didn't want to get so far out that I wouldn't be able to return, and, to be honest, I didn't have much experience tacking in this sort of wind. I needed to continually remind myself I could do it. Turns out I could. Trial by fire, my favorite kind. Achievement unlocked: Tacking in High Wind. As I approached the buoy, however, I suddenly couldn't.

There was a convergence of varying winds at that spot, just short of where I'd need to start turning the boat, such that if I wasn't willing to continue further out to sea, I wasn't able to move at all. I turned hard to port (that's left, one fact I learned from a book) and was becalmed in an instant. And that's when I learned another new thing about sailing: Once you're stopped, it's damn hard to get back going again.

I hadn't really noticed it yet, but the ocean current was pulling me out to sea. To head back to shore, I'd be fighting both wind and current. So even if I was able to catch a little wind by tacking, I'd need to catch enough to overcome the current, or I'd still be moving in the wrong direction.

I'd experienced this phenomenon a few years before, in a 20 foot power boat just off the coast of Massachusetts. That day, again right before a storm (I must be crazy) I'd ventured out with a few friends to tool around the Bay for a few hours, then was chased back into port by the approaching storm. On that day we learned the joy of bouncing hard down on the waves, and how a boat that seems big tied up to the pier feels very, very small against the fury of the sea.

Even at full throttle, the boat's engine wasn't powerful enough to propel us forward against the swift, storm-driven ocean current. For a full ten minutes I held the throttle down, bow pointed toward shore, crashing through the waves, while watching the shore slip further and further away. I'd had to tack even then, angling into port, just off center of the current to gather enough speed to barrel into the harbor just as the clouds closed in and the rain began to fall.

We Are Not Mainstream Ronald Meeus 64 Comments
Comments on