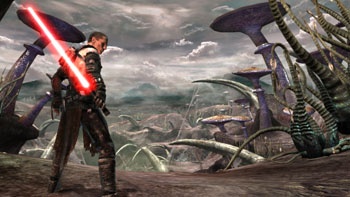 I like Star Wars. Whatever else may be written about me after I'm gone, please allow this simple statement to persevere. I wouldn't call my enjoyment of Star Wars a passion, really. Not in the same way some people have a passion for bringing clean water to the Sahara. Not in the way that I'm going to get a Darth Vader tattoo on my arm or anything. But I do like it a great deal.

I don't remember seeing the original film in the theater, but I know I did. I was four. My mother to this day cites the fact she viewed it on her own before escorting me to the theater as an example of her excellent parenting skills. "It had a lot of monsters in it," she says. She wanted to make sure they weren't too scary. She needn't have worried. I loved the monsters. Loved everything about that movie. I was an instant fan.

I remember seeing the second film, and the third. And the fourth, fifth and sixth. In other words, I like Star Wars. I stood in line to see the original films when they were re-released last century. I saw them all in one day, stopping only once, briefly, for Indian food. I stood in line for tickets and was not ashamed. I didn't dress up though. I don't like it that much.

If I had to put a finger on what, exactly rings my bell about Star Wars, I'd have to say it's the Jedi. The idea of these dudes running around lopping off the hands of the wicked, leaping tall buildings in a single bound and "feeling" things on a deep, spiritual level kind of blows my mind. They're like beatnik policemen. Merry Pranksters with laser swords, shouting "Semper Fi" as they write you a parking ticket. It's absurd and fantastic all at the same time. The kind of thing that can only exist in the land of science fiction.

The only thing that sucks about Jedi is they're not fun. Criminally so. Think of every single thing you'd like to do if you could use the Force and wield a lightsaber. Now stop thinking about it, because Jedi don't do it. Revenge? They're above it. Pulling people's pants down with the Force? Yeah, right. Don't make me laugh. Using the laser sword to impress the girls? Give me a break. Jedi don't date. They don't do anything. Don't drink, don't smoke ... nothing.

So they've got all these cool powers, but they never use them. Bo-ring. Enter: The Force Unleashed. This is the game for everyone who's ever wanted to use the Force to fling banana peels into the path of little old ladies, and unzip zippers to watch people squirm.

Granted, not everyone will enjoy this game. As is typical with LucasArts' Star Wars releases, The Force Unleashed doesn't pretend to be genre busting, but rather follows an existing trend hoping to cash in. Just as the X-Wing and TIE Fighter games horned in on the flight sim craze, and Dark Forces followed quickly (and profitably) on the heels of Doom, The Force Unleashed borrows heavily from the third person genre's lead instigator, God of War. In fact, I'd go so far as to call it God of Star Wars. Which is unfortunate, because I hate God of War. I found it to be pointless and frustrating, like sexy in a Smart Car.