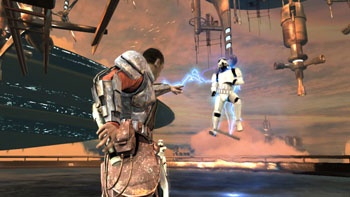 If you enjoyed the first five minutes of God of War, then A) you and I will never be friends, but more importantly, B) you will enjoy the rest of the game and every sequel. It's a very shallow experience. Wade into sea of baddies, press buttons repeatedly, rinse and repeat. And yes, you can say the same about almost any other type of game, but unlike with God of War, I usually find that to be enjoyable. Besides, once you slice one person in half with a sword on the end of a chain, it kind of stops being fun. The experience doesn't, as they say, scale.

I played God of War for exactly one hour, then, frustrated and bored, ripped it out of my machine and pounded my head against a wall for relief. So, when I discovered The Force Unleashed followed in its footsteps, I almost cried. Luckily, I like Star Wars, and as every single one of us has known instinctively for more than 20 years, no amount of game design crap can make flinging dudes around with the Force not fun.

Long load times, quick-time events, ridiculously irritating boss monsters and enemies with perfectly timed ranged attacks that knock you flat on your ass, unable to move until your painfully animated self clambers back onto his feet just in time to get flattened again ... none of this matters. Sure my controller has seen better days, having been flung against the wall, thrown to the floor and twisted to death in the angry grip of a frustrated gamer so deep in the throes of hating a game he wants it to die in every painful way possible over and over and over again. But still, flinging dudes around with the Force is fun, and so is The Force Unleashed. Fun enough to play God of War dressed as Star Wars. Fun enough to eat nails, even.

There was a lot of talk before the release of The Force Unleashed about a deep storyline with a choice between good and evil and all that crap. Forget that. Those were lies. I don't know why they said all that. There's a story, presented in cut scenes, which is fairly interesting, but you don't get to participate. Perhaps the main character ultimately makes a choice between good and evil, but I'm not at the end yet, and so far, my participation in the story has been limited to stuffing my mouth with Cheetos as it plays out in front of me. Hardly revolutionary. Knights of the Old Republic 3, this game is not.

There was also a lot of talk about the amazing new technology driving The Force Unleashed. They claimed it would revolutionize games and movies and maybe even sex with your wife too. They claimed stuff would blow up into neat, little bits like you'd never seen before. They lied. It may be happening, but I don't see it. Stuff blows up, sure. You can blow lots of stuff away, but I wouldn't say I'm blown away by the blowing away. I'd say whoever got talked into investing in cutting edge tech to represent stuff blowing up got lied to. Blowing stuff up is blowing stuff up. Sorry, guys. Put your money in precious metals instead. We're counting on you. /fingergun.