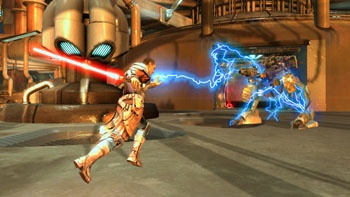 How about another? There's an annoying enemy called the Purge Trooper, who's part Stromtrooper, part robot, who shoots rockets at you and is hard to kill. Get in close and he picks you up and does a TNA move on you, slamming you to the ground. Try a standoff tactic and he blasts you with rockets. Annoying. Good for you The Force has longer range than rockets. Grab a bit of exploding junk and hurl it at him. He'll go flying off a cliff, plummeting to the ground, and you'll be rid of him. You'll even get style points for killing him in an interesting way. Come on! How freaking awesome is that? A game that rewards you for creative use of deadly physics? I must kiss the man who dreamt this up. After I slap him for copying God of War.

Remember a game called Black & White, by that guy who made Fable and who always claims his games are the best games ever? Yeah, it wasn't the best game ever. But it did have a fun mechanic in it where you could pick up little dudes with your Hand of God and then fling them across the landscape willy-nilly, crushing the life out of their tiny, ant-like bodies. There were a lot of things wrong with that game, but I was willing to overlook most of them for that one beautiful, perhaps ancillary, feature. I spent hours flinging dudes around, even when I shouldn't have. Just because it was fun. In fact, I still refer to that game as the dude flinging game.

The Force Unleashed may, ultimately, not be the best action game (or even Star Wars game) ever made, but as far as telekinetic physics-based playgrounds go, it's the best thing since sliced bread. All that's missing is a camera so you can share all of the ways you've discovered to fling and destroy. And a Force-based sex minigame. Ideas for the sequel, fellas. Write this stuff down.

Russ Pitts doesn't believe in hokey religions and ancient weapons, but he knows what he likes. His blog can be found at www.falsegravity.com